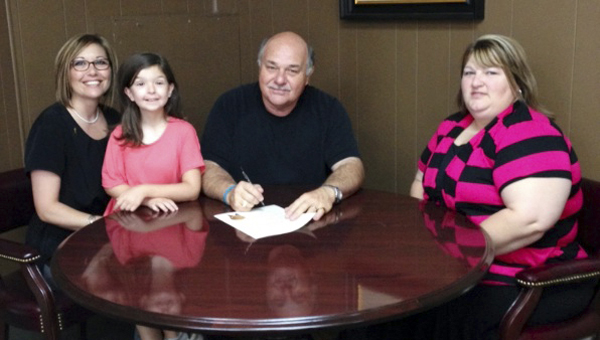 Childhood cancer has impacted six families in Demopolis, and Jennifer Thomason and her daughter, Anna-Coleman Yelverton, have been working to raise awareness in Demopolis and around the state of Alabama over the last three-and-a-half years.

Yelverton was diagnosed with rhabdomyosarcoma of the sinuses at the age of 8. Rhabdo is a soft tissue cancer and generally responds well to treatment. She had 42 weeks of chemo and 23 radiation treatments.

She has been in remission for 3 years and seven months and is flourishing. She started middle school this year and is a part of the Tiger Cubs Cheerleading Squad. 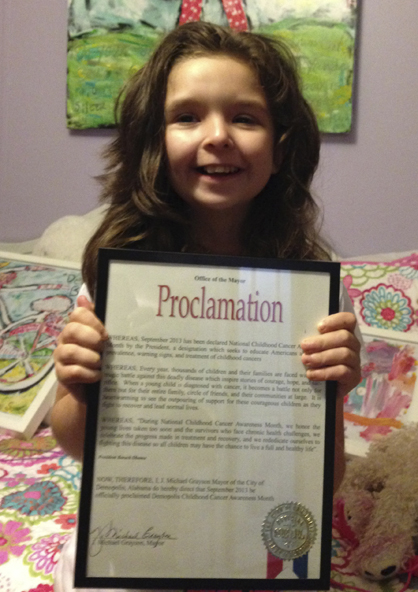 “It’s good for the city to recognize childhood cancer and raise awareness for it,” Thomason said. “It’s extremely important to us because it helps raise awareness and brings attention to the issue.”

She added that she’s trying to help Childhood Cancer Awareness Month become a statewide effort. Gov. Robert Bentley signs a proclamation every year, but Thomason said she hopes every city in the state will do the same.

“The more awareness we can raise, the better,” she said.

Thomason said T-shirts were sold through Robertson Banking Company as part of the Go Gold Campaign, and the Demopolis High School football field was painted with gold ribbons for last week’s game against Jemison.