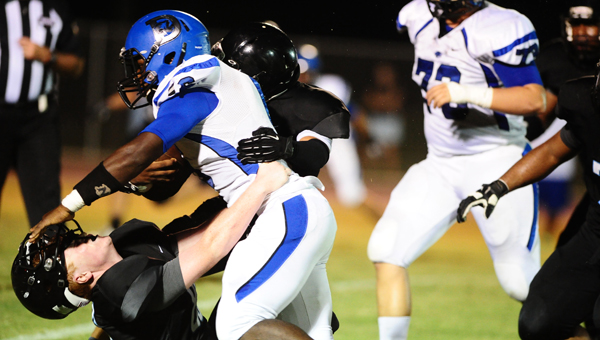 Demopolis overcame a 17-0 deficit to down Helena 48-31. Above, Jayjerrin Craigs runs over a Helena defender.

The Demopolis Tigers spoiled Helena’s first home game in school history with a 48-31 win over the Huskies.

“We expected a lot of emotions with it being their first home game the school has ever had, but I really thought they might be overhyped and they weren’t,” said DHS head coach Tom Causey. “I’ve got to give them credit. They came out swinging.”

The play of the game came as time expired in the first half with Demopolis trailing 17-14. After a series of turnovers which included an interception by Helena’s Austin Davis, an interception by Demopolis’ Drew Jones, a fumble recovery by Helena’s Justin Waston and a fumble recovery by Demopolis’ Davontae May, the Tigers were left with 11.5 seconds to take the lead before the half. 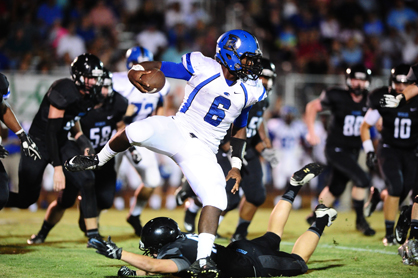 After an incompletion on first down from the Helena 35 yard line, Demopolis quarterback Jamarcus Ezell found Ryan Schroeder in the endzone as time expired in the half to give Demopolis a 21-17 lead and take the bite out of the Huskies’ bark.

“All summer I told Ryan Schroeder that I’ve got confidence in him, and when I threw that pass, I was 100 percent sure he was going to come down with it,” Ezell said.

“Ryan Schroeder made a heck of a play on that touchdown,” Causey said. “I was amazed, honestly. I didn’t know he had caught it.”

Helena jumped out to their 17-0 lead after a 34-yard field goal by Jack Reid on the Huskies second drive, then a two-yard TD run by Helena quarterback Riley Davis and a four-yard TD run by Devan Walker. 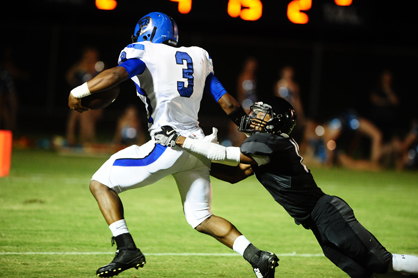 Demopolis’ Rashad Lynch runs past Helena tacklers. He finished the game with 131 yards and three touchdowns on nine carries.

Demopolis responded on the first play of their drive following the Walker TD when Ezell came into the game for DHS starter Logan McVay. Rashad Lynch took a handoff 60 yards for a score to put Demopolis on the board.

With 5:18 to play in the half, Lynch added his second score of the night on a 15-yard carry to bring the score to 17-14. The events in the final minute of the half led to a 21-17 Demopolis lead going into the locker room.

The Tigers came out blazing in the second half as well, scoring just 1:28 seconds into the third quarter on a 16-yard TD run by Drew Jones.

R.J. Cox forced and recovered a fumble by Helena quarterback Diondre’ Sackreiter. On the next play, Jayjerein Craig ran it in from 25 yards out to put DHS up 34-17.

Russ Logan intercepted a pass on Helena’s next drive, giving Demopolis the ball on the Helena 37 yard line.

Lynch scored his third and final touchdown of the game on a 18-yard run that gave Demopolis a 41-17 lead.

The Tigers’ final score of the game came on a 16-yard touchdown run by Jones.

Helena added a score on a 9-yard run by Terrel Blevins with 7:45 to play in the game, then a 15-yard touchdown pass from Davis to Phildon Dublin to make the final score 48-31.

“We came out playing hard, and I appreciate the effort of our guys tonight,” Helena head coach Watt Parker said. “Our youth and inexperience showed up in this one, but Demopolis is a great program. They were better than us at the end of the day. We need some more time in the weight room so we can match up physically with teams like Demopolis.”

Causey gave credit to Parker on the work he has done with the fledgling Helena program.

“Coach Parker has done a great job building this program from the ground up since May,” he said. “They’re a good football team.”

Demopolis ended the game with 298 yards rushing and 421 total yards. Lynch had 131 of those rushing yards on nine carries to go along with his three scores. Craig had 69 yards and a TD on 10 carries and Jones had 39 yards and two touchdowns on six carries.

Demopolis will be on the road Thursday night at Jackson next week for an out-of-region battle.