Demopolis knocks off No. 3 Jackson on road 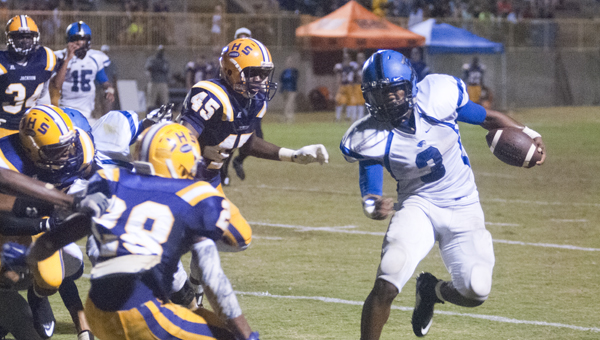 Demopolis running back Rashad Lynch jukes a Jackson defender. He finished the game with 102 yards and two touchdowns on 19 carries.

The Demopolis Tigers held off Jackson late in the game to preserve a 28-21 win over the No. 3 team in Class 5A on the road.

Demopolis’ defense forced a turnover inside the five yard line with under two minutes to play to stop Jackson from scoring the potential tying or go-ahead touchdown.

Aggies quarterback Demarcus Williams made a run from the Demopolis 11 toward the endzone, but Demopolis’ Davontae May was able to knock the ball loose as he was going down, and Marcus Wright was able to fall on it in the endzone to give the Tigers the ball back.

“We put it on our defense,” DHS head coach Tom Causey said. “Lord knows they went 100 [yards], and we got a fumble there at the end.”

Before the game-saving fumble, Demopolis had been knocking on Jackson’s doorstep, but a goal line stand by the Aggies kept the score 28-21 with five minutes to play. 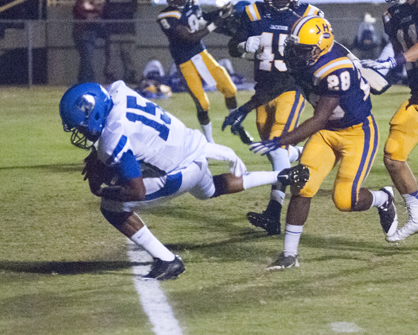 Demopolis quarterback Jamarcus Ezell crosses the goal line for a score. He led the Tigers with 217 rushing yards and two touchdowns.

Demopolis didn’t get off to the start they wanted to, as a fumble on their first drive was returned 21 yards by Joshua Carpenter for a touchdown. The extra point was blocked by Tim Bonner, leaving Jackson with a 6-0 lead.

Demopolis responded on their next drive, though, which was capped off by a 3-yard Rashad Lynch touchdown run. Tyler Overstreet connected on the extra point attempt, giving Demopolis a 7-6 lead.

A quarterback pressure and pass deflection by Bonner allowed Logan McVay to come up and make a play on a pass for an interception to give Demopolis good field position on the Jackson 28 yard line.

DHS quarterback Jamarcus Ezell finished the drive on a 10-yard touchdown run. Overstreet converted on the point after attempt, putting Demopolis ahead 14-6.

Demopolis forced a punt on the next Jackson drive and was able to drive down and score again on their next offensive series. This time, Lynch got the call again and scored from one yard out. Overstreet was true on the PAT, putting Demopolis on top 21-6, a score that held until halftime. 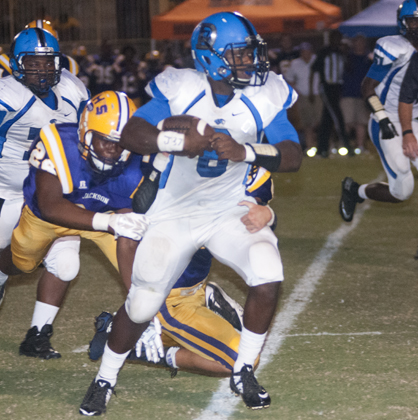 Jayjerein runs through a Jackson tackler.

Matt Beckum and McVay each added interceptions before halftime, but neither drive resulted in points for the Tigers.

The third quarter opened much like the first quarter, with a fumble returned for a touchdown by Jackson. This time, Brian Rotch scooped the fumble and scored from 67 yards out. Williams converted the two-point attempt to make the score 21-14 with 10:18 to play in the third quarter.

Demopolis responded on their next drive with another score. Ezell ran it in from the 11 yard line, and Overstreet added the extra point, to give Demopolis a 28-14 lead.

Jackson answered once again to pull within a touchdown. Michael Phillips scored on a 6-yard run and Miller McHargue hit the extra point to make the score 28-21 with 1:36 to play in the third quarter.

On Demopolis’ next drive, they ate up the rest of the third quarter and more than half of the fourth quarter.

With a first-and-goal on the 2 yard line, Demopolis was in position to put the game out of reach. The Aggies held strong for three plays, and on fourth-and-goal from the 1 yard line, Causey elected to go for the touchdown. The Aggies stood the Tigers up at the line of scrimmage, resulting in a turnover on downs.

“We probably should have kicked it right there, but our defense came up big for us,” he said. “Our guys kept scrapping and fighting. The only thing going through my head were flashes from last year and their quarterback running it in on the two-point conversion.”

On Jackson’s final drive, they got inside the redzone, but Williams’ fumble effectively ended the game for the Aggies.

May said he saw the play develop and knew he had to make a play.

“Russ Logan made the stop and when I saw him going down, I went for the ball and knocked it out of his hands,” May said.

Wright said when he saw the ball come loose, he knew what he had to do.

“Our coaches tell us to see the ball and go get it, and that’s what I did,” Wright said. “I saw D-May make a play, and I went for the ball.”

Causey added that it’s good for the team to get a win over an opponent like Jackson.

“I hope we come back ready to play Sumter Central next week,” he said. “This is a big win for us tonight, and it can be tomorrow, but we have to be focused on the big picture of getting better every day. Beating a team the caliber of Jackson is big for us.”

“We had a lot of turnovers, and we were inept on offense in the first half,” he said. “We couldn’t seem to slow them down, either. We struggled on both sides of the ball. We got beat by a better football team tonight.”