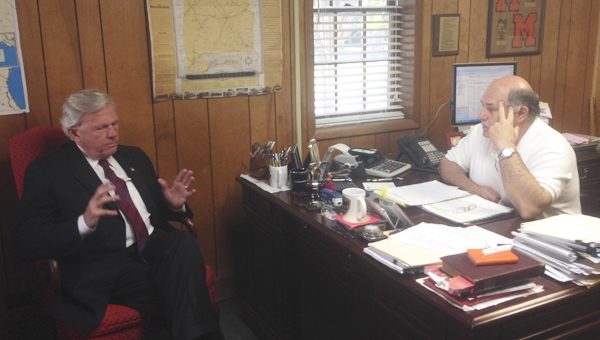 Democratic gubernatorial candidate Parker Griffith stopped in Demopolis on Tuesday and spoke with Mayor Mike Grayson about his ideas for the office.

Parker Griffith, the Democratic candidate for governor in November’s election, made a stop in Demopolis along his campaign trail Tuesday to meet citizens and city officials.

Griffith is running against Gov. Robert Bentley, who will try for his second term as Governor of Alabama. He is running on three main platforms – instituting an education lottery, expanding Medicaid and creating jobs.

He said he wants to establish the lottery because he has seen the positive impact it has had on education in neighboring states of Georgia, Tennessee and Florida.

He also said the state of Alabama is missing out on federal dollars by refusing to expand Medicaid.

“There’s a belief that Medicaid is for those who don’t work, but that couldn’t be farther from the truth. There are many who do work who have fallen through the cracks because they can’t afford a healthcare policy.”

He said he feels that with his platforms on education and healthcare, it will help with job creation.

“A healthy and educated Alabama means we can attract businesses to come to our state that will hire Alabamians,” Griffith said. “Right now, many of our children who take advantage of our educational institutions leave for jobs in other states. We want to give them the opportunity to stay in Alabama. Many of the jobs being created now are either minimum wage jobs, or the people are being hired through temp agencies with no benefits, so they can’t afford health insurance.”

Griffith added that he plans to improve transportation in the Black Belt, which will help lower the region’s unemployment.

“We see chronic unemployment in the Black Belt,” he said. “We know we need to help that. Expansion of Medicaid will help bring jobs here. Republican and Democratic governors across the country are expanding Medicaid, and we can’t do economic development without healthcare.

Griffith is a radiation oncologist by trade and has served in the U.S. House of Representatives and the state senate since retiring from medicine.