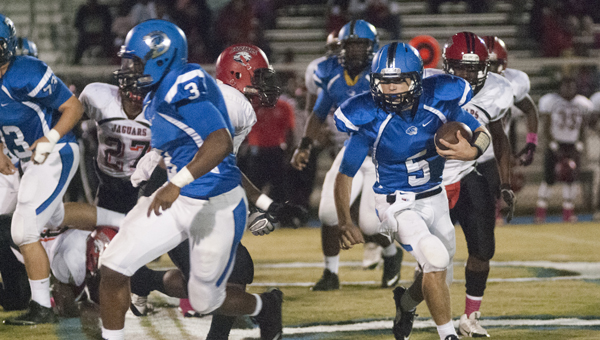 The Demopolis Tigers earned their first shutout of the season with a 38-0 win over Sumter Central on Friday night.

The Jaguars held Demopolis in check in the first half, but the Tigers pulled away in the third quarter to secure the region win.

“We were outplayed and outcoached in the first half,” DHS head coach Tom Causey said. “Coach [Eddie] Jackson is doing a great job with those players, and they showed up ready to play tonight. We came out and played a little better in the second half.”

On Demopolis’ first drive of the game, they didn’t waste any time getting inside the Jaguars 10 yard line, but the offense stalled out and were forced to kick a field goal. Tyler Overstreet hit the 20-yard attempt to put the Tigers ahead 3-0 with 5:12 to play in the opening frame. 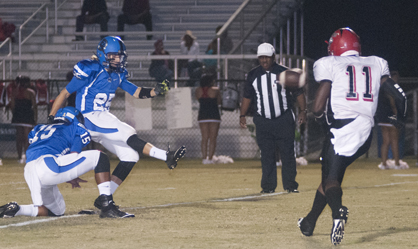 With 6:39 to play in the half, Demopolis was able to put a touchdown on the board on a 4-yard TD run by Jamarcus Ezell. Overstreet converted the extra point attempt and Demopolis took a 10-0 lead – a score that held until halftime.

Demopolis came out on fire in the third quarter and scored on their next four possessions.

Jayjerein Craig scored from two yards out with 8:56 to play, giving Demopolis a 17-0 lead.

On the next drive, Craig finished it off again, this time from one yard out, to put the Tigers ahead 24-0.

Another three-and-out by Sumter Central gave Demopolis the ball back, and Rashad Lynch scored on a 22-yard run, putting Demopolis on top 31-0. 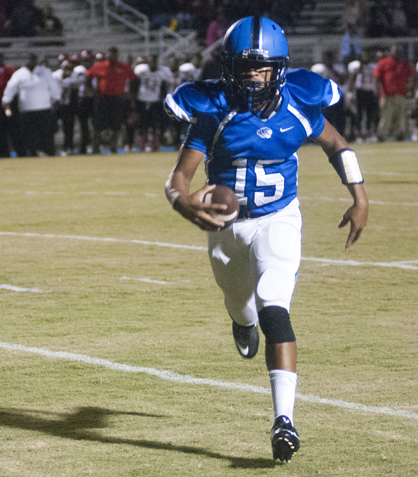 Jamarcus Ezell scores from 4 yards out for Demopolis.

A Demetrius Davis interception late in the third quarter gave Demopolis the ball back again.

With 7:50 to play in the game, Drew Jones capped off the drive with a 16-yard TD run for the Tigers’ final score of the game.

“We didn’t play real hard in the first half, but our experience took over in the second half and we were able to get a couple scores in the third quarter.”

R.J. Cox led the way on defense for Demopolis with eight tackles and a sack.

The Tigers will be on the road next week as they travel to Tuscaloosa to take on Central-Tuscaloosa on Friday.