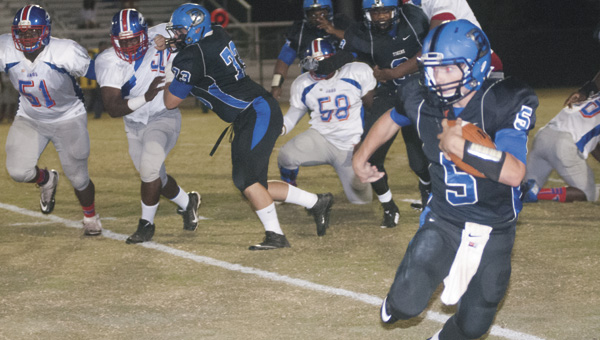 Demopolis quarterback Logan McVay makes a move on a defender on his 65-yard touchdown run in the second quarter Friday night against Wilcox Central.

The Demopolis Tigers clinched their first region title since 2010 Friday night with a 58-6 win over Wilcox Central on homecoming night.

The Tigers are now 6-0 in Class 5A, Region 4 with one game left to play on the road against Dallas County next week.

“Winning the region is huge for us,” DHS head coach Tom Causey said. “It’s always good to be a champion in anything. This was one of the goals they guys made before the season started, so they met that goal on their path to where we want to be.”

The Jaguars’ biggest play of the game came on their first play from scrimmage on a 57-yard scramble by their quarterback. They were able to cap off the drive on a 14-yard touchdown pass. The extra point was missed, and the Jags led Demopolis 6-0 with 10:25 to play in the first quarter.

Demopolis responded and drove 54 yards on a drive that ended in a 7-yard Drew Jones touchdown run.

On the next Wilcox drive, AJ Collier came up with an interception for Demopolis and returned it to the Jaguars 6 yard line. Jayjerein Craig ran it in on the next play to put Demopolis ahead 14-6.

A bad snap on a punt attempt allowed Demopolis to take possession on the Wilcox 9 yard line. Rashad Lynch scored on the first play of the drive on a 9-yard run to put the Tigers ahead 21-0 with 1:32 to play in the first quarter.

After forcing a turnover on downs, the Tigers got on the board again, this time on a 65-yard Logan McVay touchdown run, putting Demopolis on top 28-6.

Jones came up with an interception on the Jaguars’ next drive, and the Tigers took over at the Wilcox 21 yard line.

McVay found Wil Stephens on an 8-yard touchdown pass, which gave the Tigers a 35-6 lead, which held until halftime. 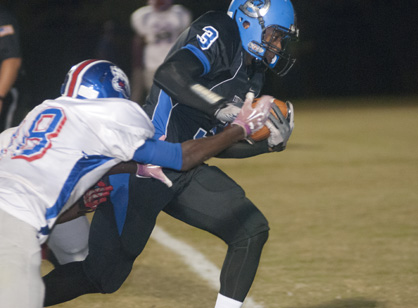 The Jaguars kicked off to open the second half, and Rashad Lynch returned the kick 77 yards for a score, putting Demopolis on top 42-6.

Tim Bonner recovered a fumble for the Tigers on the next Wilcox drive, but Demopolis’ drive stalled out inside the Wilcox 10 yard line after a fumble.

The Jaguars fumbled the ball out of the endzone on their next possession for a safety, giving Demopolis a 44-6 lead.

With 4.9 seconds to play in the third quarter, freshman quarterback Andrew Patterson scored on a 9-yard run, putting the Tigers ahead 51-6.

The final score of the night came on a 1-yard TD run by Jeremy Foster.

Percy Cistrunk came up with an interception that sealed the game.

Demopolis place kicker Tyler Overstreet was a perfect 8-for-8 on extra point attempts in the game.

“Our second team played their tail off in the second half,” Causey said. “I’m proud of the way they performed tonight.”

Demopolis finished the game with 38 rushes for 282 yards. They held Wilcox Central to 120 total yards of offense.