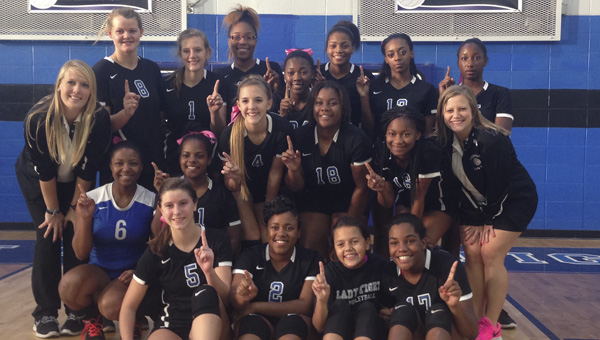 The Demopolis Lady Tigers are the 2014 Class 5A, Area 6 champions.

The Demopolis Lady Tigers won the Class 5A, Area 6 tournament Tuesday afternoon for the second year in a row.

With the tournament win, Demopolis will face Charles Henderson at 4:15 p.m. Friday at Cramton Bowl in Montgomery in the AHSAA Regional.

“This win lets our girls know we have to potential to go farther than we ever have before as a program,” DHS head coach Angela Sanders said. “Our girls have the confidence to go past the first round, and they believe they can go past the second round. I believe we can too.”

In the second set against Dallas County, the Lady Tigers fell behind 19-12 at one point before coming back to win 25-22.

“The girls were able to reflect on previous games where they’ve come from eight or 10 points down, so they knew they had the ability to come back,” Sanders said. “That gave them the confidence to do it.”

Ivery Moore was strong at the net against the Lady Hornets, and she was also able to earn several points for her team while serving.

Demopolis earned a spot in the area championship game by defeating Wilcox Central three sets to none earlier in the afternoon.

Wilcox Central battled hard in the first set, keeping the score close until Demopolis pulled away at the end to win 25-15.

In the second set, Montgomery served to begin the set and Demopolis jumped out to a 10-0 lead.

Wilcox Central wasn’t able to battle back and dropped the set 25-8.

In the third set, Wilcox kept it close early, but Demopolis pulled away to take an 18-6 lead and eventually win the set 25-9. Moore was able to string off 10 straight points as server during the third set, which allowed the Lady Tigers to pull away and take the set.

After the win over Wilcox Central, the Lady Tigers held a record of 20-5 on the season.

“We’ve accomplished a lot this year to get to 20-5,” DHS head coach Angela Sanders said. “By making it to super regionals, we’re one step closer to exceeding our goals.”

Sanders said that for the team to be successful at regionals, they’ll have to play the best volleyball they’ve played all season.

“We have to work on our quickness as a team,” she said. “I’ve seen us play really well at times this season, and we need to play at that level at all times this weekend. We haven’t played at our potential in every match this season, but we’ll need to be at that level to continue playing.”