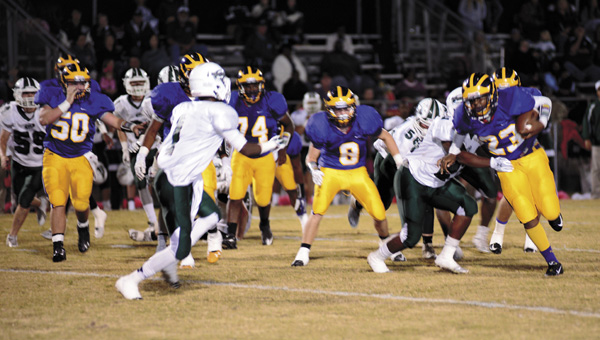 Sweet Water’s Jaylin Johnson runs through a Flomaton tackler in Friday night’s win over the Hurricanes.

The Sweet Water Bulldogs claimed the No. 2 spot in Class 2A, Region 1 Friday night with a 38-12 win over Flomaton.

The win puts Sweet Water at 6-1 in their region to end region play. By clinching the No. 2 spot in the region, the Bulldogs will host in the first round of the AHSAA playoffs in two weeks.

“We’ve got a tough game against Maplesville on the road next week, but we’re going to start preparing for our first-round opponent as well,” Sweet Water head coach Pat Thompson said. “We’re going to look at some film and start getting ready for that game.”

Friday night against Flomaton, the Hurricanes came out with a big play to open the game. Tripp Vickery found Terrell Flavors on a screen pass that went 88 yards down to the Sweet Water 1 yard line. 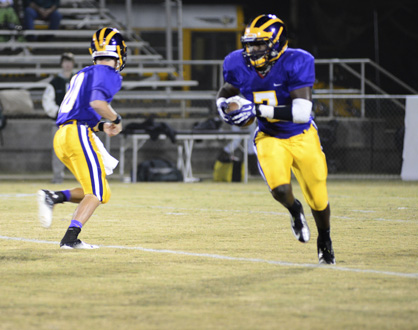 Two plays later, Malik Grace ran it in for the Hurricanes to put them ahead 6-0. The extra point was blocked by Xavier McIntosh.

The Bulldogs didn’t let Flomaton’s quick start phase them, though, as they drove down the field and scored on a 9-yard McIntosh run. The extra point by De’Shawn Blanks was good, giving the Bulldogs a 7-6 lead.

After forcing a three-and-out, Sweet Water drove down into field goal range, and Blanks hit a 28-yard field goal to add to the slim lead, making the score 10-6 with 27 seconds to play in the opening quarter.

Early in the second quarter, after the Bulldogs defense forced another three-and-out, Tyler Echols blocked a punt, which was recovered by Jonah Smith and returned for a touchdown to put Sweet Water ahead 17-6.

“We had a good night on special teams,” Thompson said. “With the blocked punt and the field goal, I was pleased. I think that’s the first field goal we’ve made down here in five or six years.”

The Bulldogs cushioned their lead right before halftime on a 2-yard touchdown run by Keldric Greene to make the score 24-6 at the half.

Midway through the third quarter, McIntosh added another Sweet Water score on a 42-yard scamper to put the Bulldogs ahead 31-6.

The Bulldogs’ final score of the night came on a 10-yard run by Jaylin Johnson to give Sweet Water a 38-6 lead.

On the ensuing kickoff, Flavors fielded the kick at his own 15 yard line and returned it 85 yards for a score. The two-point conversion attempt failed, making the score 38-12.

“I thought our offensive line blocked well, and both the offensive and defensive lines controlled the line of scrimmage,” Thompson said.

The Bulldogs will travel to Maplesville next Friday night for their regular season finale.