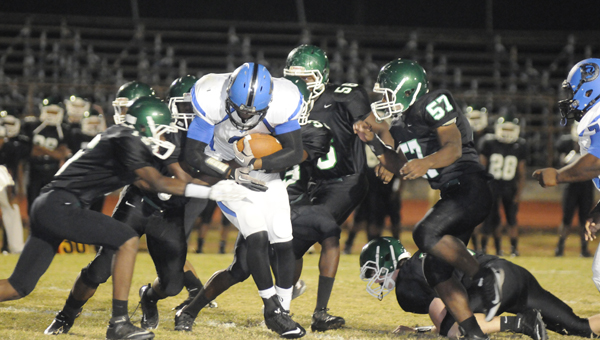 Rashad Lynch drags a pile of Dallas County defenders as he fights for extra yards in Friday night’s 41-18 win over the Hornets.

In the first half, the Tigers outgained the Hornets 143 yards to -34.

Dallas County came out in the third quarter and put up two quick touchdowns but couldn’t close the gap further.

Tyler Overstreet put Demopolis on the board first with a 27-yard field goal. He would hit another one of 26 yards later in the game.

Rashad Lynch added the next score on a 5-yard run, which was followed by a 7-yard scoring pass from Jamarcus Ezell to Wil Stephens.

Leading 17-0, Russ Logan recovered a fumble in what would be a career game for the freshman. 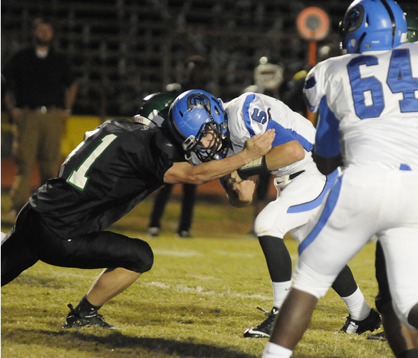 The turnover would lead to a 17-yard touchdown pass from Ezell to Ryan Schroeder.

A 55-yard run by Lynch and Overstreet’s second kick capped first half scoring at 34-0.

“We played well in the first half. We have some corrections to make between now and next Thursday,” said Demopolis head coach Tom Causey.

Dallas County scored twice early in the third quarter off a 3-yard run by Micah Kennedy off of a 6-yard pass.

A 2-yard run from Demopolis’ Drew Jones and an 8-yard pass from Dallas County’s Danny Wallace put things at 41-18 with 1:28 to go.

The Tigers ended the night with 202 yards of total offense, with 151 of that coming on the ground.

Dallas County rebounded in the second half to finish with 157 yards, a big chunk of that from two long passes that set up two touchdowns.

Lynch led Demopolis with 85 yards on 7 carries for two touchdowns.

Logan ended the night with two tackles, two fumble recoveries and an interception.

Dallas County hosts Southside next week, while Demopolis will welcome Hillcrest-Tuscaloosa on Thursday night in the regular season finale.