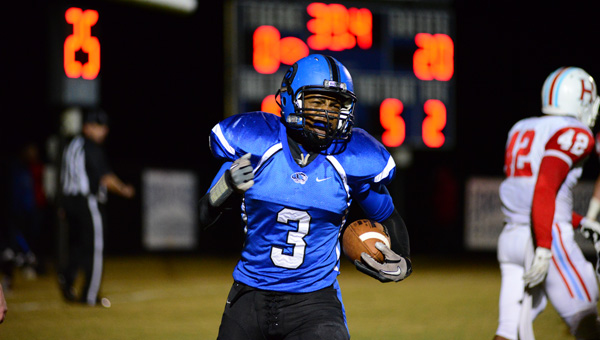 A slow start proved too much for Demopolis High School to overcome Thursday night as the Tigers fell 39-29 to Class 6A Hillcrest-Tuscaloosa at Tiger Stadium.

While the Tigers sputtered early, the Patriots came out firing on all cylinders.

Just more than four minutes into the contest, Hillcrest had already staked claim to a 13-0 lead.

Cahlil Ellis capped the Patriots opening drive with a short scoring run with 10:43 to play in the opening stanza. Following an interception, the Patriots once again found the end zone when Brian Robinson barreled his way in from three yards out for the first of his two touchdowns and a 13-0 lead.

The Patriots (7-3) pushed their lead to 20-0 at the 4:43 mark of the second quarter when Chad Hunter Wyatt connected with Darnell Webb, Jr. for a 20-yard touchdown on fourth-and-10.

“I think we came out kind of big eyed,” Demopolis head coach Tom Causey said. “We made some mistakes that are uncharacteristic for us and just like that we were down 20-0.”

The Tigers (8-2) began to claw their way back into the game late in the first half. With 39 seconds to play in the second quarter, senior running back Rashad Lynch muscled his way into the end zone. Senior Tyler Overstreet added the extra point and the Tigers trailed 20-7 heading into the intermission.

“That score right before the half was big,” Causey said.

Coming out of the break, Demopolis turned the ball over on a fumble at the 50-yard line, which led to a 33-yard touchdown pass from Wyatt to Webb to put the Patriots ahead 26-7.

But the Tigers refused to give in.

With 2:29 to play in the third quarter, senior quarterback Jamarcus Ezell lofted a screen pass to Lynch, who then raced 20 yards for a touchdown. Overstreet’s point after attempt cut the Patriots’ lead to 26-14.

Another Demopolis turnover on their first possession of the fourth quarter helped Hillcrest extend its lead to 32-14.

The Tigers would answer on their next possession, however.

After Ezell connected with senior wide receiver Ryan Schroeder for a 29-yard completion to set up first-and-goal from the 3-yard line, Lynch pounded his way into the end zone for the score. Demopolis trailed 32-22 at that point.

On the kickoff, Causey elected to gamble, calling for an onside kick. The move paid off.

The Tigers came out of the scrum with the ball.

Twenty seconds later, senior wide receiver Antonio Mackins was on the receiving end of a 53-yard touchdown pass from Ezell.

The Tigers went for a second onside kick, but this time the Patriots were ready. They recovered the kick near midfield. Robinson sealed the Hillcrest win with a 32-yard touchdown run.

“I was proud of our guys and the way they fought,” Causey said. “They could have rolled over and quit, but they didn’t.”

Demopolis will open the first round of the playoffs next Friday at home against B.C. Rain. Kickoff is set for 7 p.m.