For the second consecutive year, the Demopolis Robotics Team is heading to Auburn for the South’s BEST Regional Robotics Championship.

The team qualified by placing second at the Shelton State BEST competition last weekend. The Demopolis Robotics Team is in its second year as a program, so team sponsor Ashley Brock feels good about reaching Auburn for a second straight year.

“We’ve been busy preparing for this, and we couldn’t have gotten back here without the great mentors we have,” she said. “Last year we had mostly eighth graders, and some of them have returned this year as ninth graders. We also added some seventh and eighth graders this year. They expected a lot out of themselves after last year, and we’re all pleased and excited with the second place finish at Shelton.”

In the Shelton competition, the team finished first in marketing, first in engineering notebook, second in spirit and second in most photogenic. Brock said the scores on the robotics side weren’t as high as the team would have liked, but they were still pleased to finish second.

“My goal with this program is to help these students earn scholarships,” Brock said. “With the experience from last year, everything came a little easier this year. Last year’s objective dealt more with computers, and this year, it’s all about windmills, so it’s a new experience and the kids are learning about how windmills work and what it takes to build them.”

The team received instructions on this year’s game six weeks ago, and since then they have been busy building the robot and practicing for the game. Brock said over the next four weeks, the team will be working on tweaking the robot and making improvements on the marketing side before the trip to Auburn. 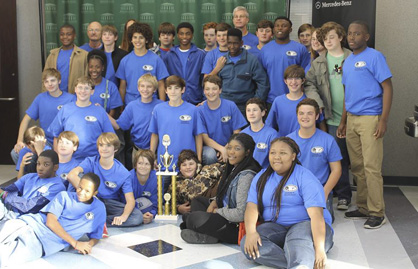 The Demopolis Robotics Team recently placed second at the Shelton State BEST competition and qualified for the region tournament, which will be held in Auburn.

“We’ve got four weeks before we go to Auburn, so we’re going to make some improvements on our marketing and our booth,” she said. “We’ll also continue working on the robot and practicing the game to hopefully have it down by the time we go. The goal is to complete as many tasks as possible in three-minute matches, so we’ll be working on getting those tasks done quickly.”

Brock also wanted to recognize the following mentors for the help with the team this year:

The top 54 teams from the 17 BEST hubs from Alabama, Florida, Georgia, Louisiana, Mississippi and Tennessee will compete in the South’s BEST competition at Auburn University on Dec. 5-7.