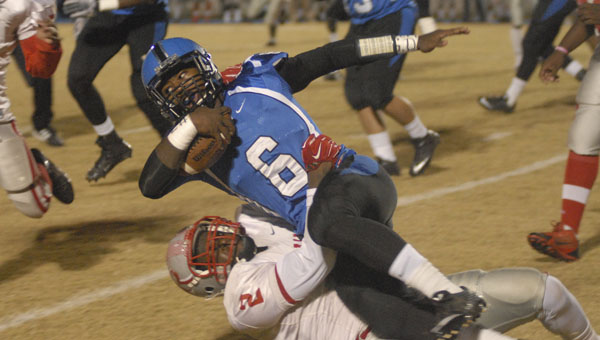 Demopolis’ Jayjerein Craig falls forward through a tackle. Craig had a touchdown run in Friday’s loss to B.C. Rain.

The Demopolis Tigers’ season came to an abrupt end Friday night in a 28-27 loss to B.C. Rain in the opening round of the Class 5A playoffs.

The Tigers had chances to put the Red Raiders away early, but penalties and turnovers in key situations kept the game close. Demopolis had to big touchdown plays called back in the first half, allowing the Red Raiders to hang around and win in crunch time.

B.C. Rain quarterback Carl Williams accounted for all four of his team’s touchdowns. He scored three on the ground rushing and one through the air with less than a minute to play in the game.

Williams found teammate Corey Brown near the sideline on a broken play that turned into a 72-yard touchdown pass with 58 seconds to play in the game. DHS head coach Tom Causey credited Williams for keeping the play alive and finding his man. 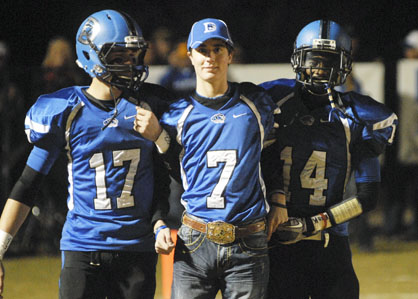 Wil Stephens (17) and Antonio Mackins (14) escort their injured teammate Jacob Browder out to midfield before Friday’s game. Browder was named head captain for the game. He was injured in a bull riding accident earlier this fall.

“The play broke down and the quarterback scrambled and kept the play alive,” Causey said. “He threw it up for grabs and the athlete went and got it. The credit goes to them for making the play.”

The game opened up with a fumble by Williams on the Red Raiders first drive that was recovered by Tim Bonner, but the Tigers weren’t able to do anything with it and turned the ball over on downs.

On B.C. Rain’s next drive, Williams was picked off by Bobby Taylor, who returned the interception 84 yards for a touchdown, but the play was called back for an illegal block. A Jamarcus Ezell fourth down pass was intercepted, and the Red Raiders took possession.

Demopolis forced a three-and-out, but another Ezell fourth down pass was intercepted early in the second quarter with the game still tied 0-0.

On the Tigers’ next drive, Jayjerein Craig burst through the line for a 68-yard touchdown run, but it too was called back on a penalty. On the next play, the Tigers gave up possession on a fumble.

Finally, with 1:28 to play in the half, B.C. Rain broke the scoreless tie on a 10-yard run by Williams. Luis Aguilar converted the extra point to put the Red Raiders ahead 7-0.

Demopolis responded just 32 seconds later with a 19-yard touchdown pass from Ezell to Ryan Schroeder to even the score following a Tyler Overstreet extra point.

The teams went into halftime tied 7-7.

Demopolis took a 14-7 lead with 7:11 to play in the third quarter on a 60-yard touchdown run by Rashad Lynch. Overstreet converted the extra point on the score.

Early in the fourth quarter, the Red Raiders evened the score 14-14 with an 8-yard touchdown run by Williams.

The Tigers were set up with good field position from a 70-yard kickoff return by Schroeder that put Demopolis at the Red Raiders 10 yard line. Craig punched it in from a yard out to put Demopolis ahead 21-14 after the Overstreet extra point.

A fumble by B.C. Rain on their next drive was recovered by Rahmeel Cook, setting Demopolis up with the ball inside Red Raiders territory.

The Tigers capitalized on the good field position and scored on a 13-yard run by Ezell. The extra point was no good, and the Tigers held a 27-21 lead with 1:19 to play.

A couple plays later, Williams found Brown for the long score through the air and the Red Raiders converted the extra point to take a 28-27 lead.

Demopolis was unable to move the ball with under a minute to go and turned the ball over on downs.

“They manned us and pressed us and made it hard for us to get to the edge,” Causey said. “They were dang good up the middle, too.”

Lynch led the Tigers with 19 carries for 179 yards and a touchdown. Cook led the way defensively with 9 total tackles, a pass deflection and a fumble recovery.

For B.C. Rain, Williams led the way with 117 yards rushing and three scores on 14 carries and a passing touchdown.