The Marengo County Commission honored a longtime county employee with a resolution after her recent retirement at Wednesday’s monthly meeting.

Loretta Carr retired at the end of October from the Marengo County Cooperative Extension System. She worked in nutrition education for 26 years before retiring. 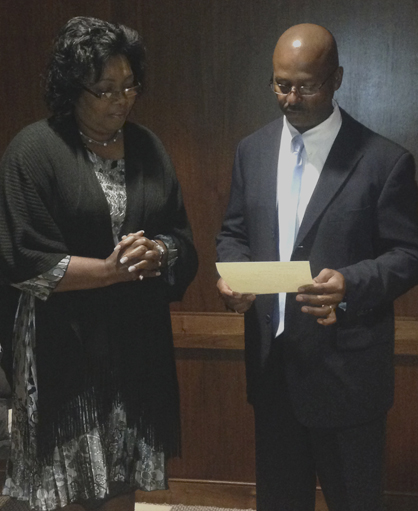 Marengo County Commissioner Calvin Martin presents a resolution to Loretta Carr for her 26 years of service in the Marengo County Cooperative Extension Service office. She worked in nutrition education for the office.

“We want to pass this resolution in honor of Loretta Carr to recognize her for her 26 years of service to the state of Alabama and the citizens of Marengo County,” Commissioner Calvin Martin said.

Carr thanked the commission for honoring her, saying they are the “best there is in the state” to work for.

Wednesday’s meeting was the first for the commission since the Nov. 4 general election, and three commissioners were reelected to their positions. Michael Thompson, Freddie Armstead and John Crawford Jr. were sworn in by Probate Judge Laurie Hall to start off the meeting.

The commission approved Richmond Evans and Marshall McDowell as new hires at the Marengo County Detention Center, and they also approved keeping the meeting dates for the commission in 2015 as the second Tuesday of each month.

In other business, the commission approved a policy from the Association of County Commissions of Alabama. The policy states that the county commission would effectively communicate the blanket conditions of county roads and bridges resulting from extreme weather conditions or other disaster events. When conditions warrant, the public will be notified through an “Impassable Travel Advisory,” then a “Resumption of Travel” advisory once conditions improve.

County Engineer Ken Atkins said the county already issued advisories when travel becomes unsafe, but this policy puts it in writing that it will be done anytime it’s necessary.