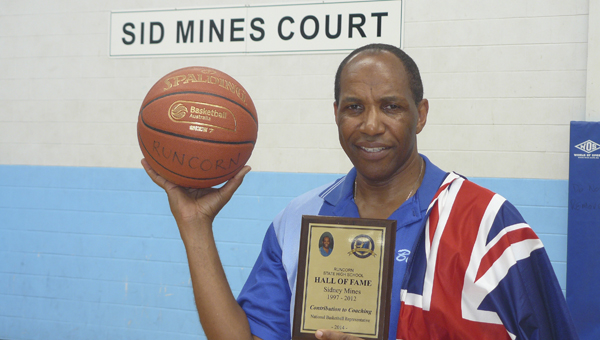 Faunsdale product and former professional basketball player Sidney Mines added to a long list of accolades in Australia this week.

Mines, 58, who grew up in Faunsdale and now lives in Australia, was inducted into the Runcorn State High School Hall of Fame in Brisbane, Queensland.

Mines taught at Runcorn for 15 years and coached them to 33 regional titles. Brisbane, Queensland, is the location of the G20 summit in Australia this week.

The award adds to a long list for the Alabama native, including Runcorn’s “Sid Mines Court” already named in his honor. He has also been inducted into the Concordia University Hall of Fame in Nebraska where he was team MVP and All-District, and he played professionally in Australia and set a record 49 rebounds in a single game.

Mines attended Amelia Love Johnson High School at Thomaston, where he played under coach Frankie Griffin before playing as a walk-on at Alabama Lutheran Junior College under coach Danny Crenshaw. Mines credits Crenshaw with giving him the opportunity that led to him traveling the world. Mines then attended Concordia University at Seward, Neb., under coaches Ruben Stohs and Wayne Rasmussen.

The legacy left by Mines at the high school will be felt for a long time.

Ten of his players have gone on to play in the United States, including Cameron Bairstow, a rookie with the Chicago Bulls in the NBA, and Mines’ son Jonathan, who is a starter at Highland University in New Mexico.

Another one of his former players is now head of the Runcorn physical education department.