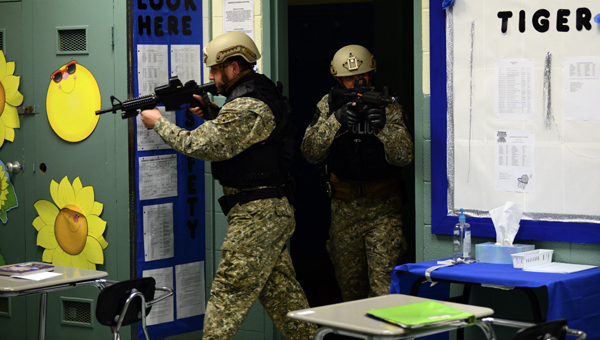 Some members of the Demopolis Police Department are participating in SWAT training this week.

DPD Chief Tommie Reese said he hopes his officers will never have to use the training, but he wants them to be ready in case an active shooter or hostage situation were to occur in the area.

Also participating in the training are officers from Birmingham, Prattville, Selma and Shelby County. The training is done through the Alabama Peace Officers Standards and Training Commission, and once officers complete the training course, they will be certified through the state for SWAT teams.

“These guys are training for 70-80 hours in a 40-hour work week,” Reese said. “They’ve been doing work at the gun range Monday and Tuesday, and they started building clearance on Wednesday.” 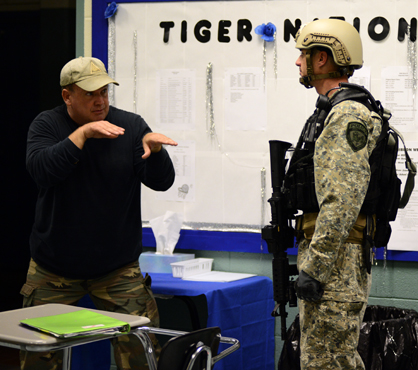 “This training is useful because there is an element of society that needs law enforcement prepared for the worst,” Goodner said. “The training will allow these men to respond effectively and efficiently. Our three main goals are to cover the danger areas, take care of the threat and protect ourselves, which protects the citizens. We stop the hurt if it’s happening and prevent the hurt from happening. This training is to equip these guys with the tools and skill set to do that properly.”

In addition to Goodner leading the training, there were also two retired Navy SEALs giving tips and direction to the officers.

Reese said he hopes a situation never comes up that the SWAT team is necessary, but he wants his guys to be prepared if it does.

“I want our team to be prepared in case a situation arises,” Reese said. “Obviously we hope we never have to deal with a situation like this, but I’d rather us know how to handle it than not.”

Reese thanked Alan Benefield, the executive director of the Alabama Peace Officers Standards and Training Commission, for allowing the training to take place in Demopolis, as well as Goodner for spending the time to come help with the training.