The University of West Alabama Board of Trustees has elected the school’s College of Business Dean Dr. Ken Tucker to serve as the school’s 12th president, effective Jan. 1, 2015.

Tucker, a Demopolis resident, replaces John G. Blackwell, who was named special administrator in March of this year, then named president in May for a period of up to 12 months. 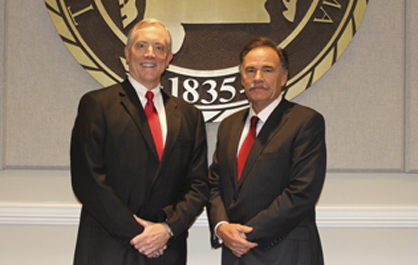 Dr. Ken Tucker, left, has been elected by the University of West Alabama Board of Trustees to serve as president of the 179-year-old institution, effective Jan. 1, 2015. Pictured with Tucker is Board of Trustees President Terry Bunn.

Tucker and Blackwell were named the two finalists in late September, following a nationwide search conducted by a committee of various campus representatives and trustees.

“This is home,” Tucker said in the moments after the board meeting, which began at 9 a.m. Friday and included two executive sessions — one for discussing the qualifications of the candidates, and a second for interviews with the candidates. The election, which carried no opposition from the present board members, was confirmed just minutes before 6 p.m. Friday.

Following the election, Board President Terry Bunn congratulated Tucker and expressed gratitude to Blackwell, who said that serving as president has been an honor for him.

Tucker echoed Board President Terry Bunn’s sentiments on Blackwell, agreeing that Blackwell had served a unique purpose for UWA through his leadership and management.

“I agree that President Blackwell has done an outstanding job during his time in the office,” Tucker said. “He came to UWA under difficult circumstances, and I believe he has been just what we needed during this time. I’m certain that I speak on behalf of our entire campus in saying that we are grateful for the work he has done here.”

Tucker said he looks forward to the coming year. Shortly after Thanksgiving, he will travel to China on behalf of the University on a business and recruiting trip. He will continue his duties as dean through the end of this calendar year.

“Some of the best times of my life have been here,” Tucker said. “I will work tirelessly and collaboratively with the board of trustees, administration, faculty, staff, and the entire UWA community to ensure that we enjoy every success possible. This university is poised for greatness, and I look forward to the work we will do to achieve that.”

Tucker expressed his gratitude for the board of trustees, saying that he considers the group one of the best overall boards that he has worked with in his career.

“I’m deeply honored by their decision,” he said. “I have tremendous respect for the board—for their professional experience, the integrity and honesty they’ve shown, and for the work that they’ve committed to UWA.”