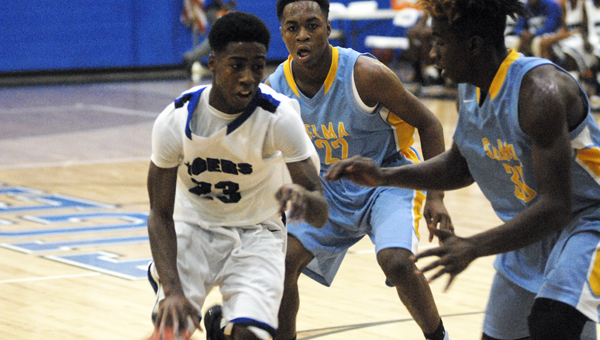 Anthony McIntosh navigates around Selma defenders in Thursday’s loss to the Saints.

The Tigers’ girls and boys struggled shooting from the field in their games, which led to the losses.

In the girls game, Selma took a 25-15 lead into the locker room at halftime, and at the start of the third quarter, stretched their lead to 13 points before Demopolis came storming back. The Lady Tigers tightened down on defense and controlled the ball leading to a tie at 30 at the end of the quarter.

The 15-5 run in the third wasn’t enough to spark Demopolis to the win, though, as Selma put together a stretch to take a 41-32 lead. The Lady Tigers fought back, but ran out of time.

“We had 19 turnovers in the game, and that really hurt us,” said Demopolis assistant coach Ronnie Abrams, who was filling in for head coach Tony Pittman in the game. “We had a lead in the fourth quarter, but turnovers hurt us. We missed nine free throws and lost by seven, so we need to improve in that area.”

Sha’Deitra White led the way for Demopolis with 18 points and 4 assists. Caleb Washington was the only other Lady Tiger in double figures with 14 points. Darneshia Harris only had 2 points, but she added 5 rebounds and 4 steals for Demopolis.

For Selma, Areyana Williams led the way with 14 points and 6 rebounds. Jamya Smith also had 14 points to go along with 5 steals. Kynadra Lewis had 8 points and 4 steals for the Lady Saints. 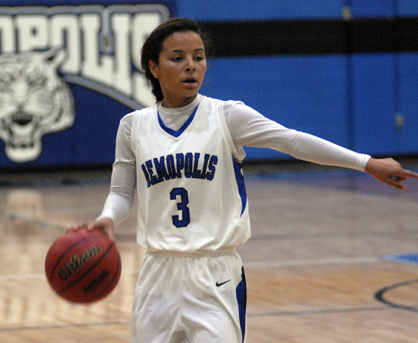 In the boys game, Demopolis was able to keep it close in the first quarter, but the Saints pulled away in the second to take a 33-17 lead into halftime.

The Tigers had a cold shooting night from the floor and struggled from the charity stripe.

“This one goes to this being our first game and Selma’s fourth,” DHS head coach Rodney Jackson said. “We need to execute better, so we’re going to go back to the drawing board.”

Selma stretched their lead in each quarter leading to the 25-point win.

Datrion Fultz was the leader for Demopolis in rebounds and steals, and he was tied for the lead in points for the Tigers. He finished the game with 12 points, 8 rebounds and 5 steals.

Anthony McIntosh also had 12 points in the game. Dalvin Long led the team in assists with four, and Charles Tripp led the way in blocks with four.

For Selma, Juwan Watters led the way with 17 points. He was helped out by Michael Griffin who finished with 13 points.

Demopolis’ boys will be back in action Monday through Wednesday next week at the Cornerstone Christian Thanksgiving Classic in Birmingham. The boys and girls team will return to action at home on Tuesday, Dec. 2, against Choctaw County.