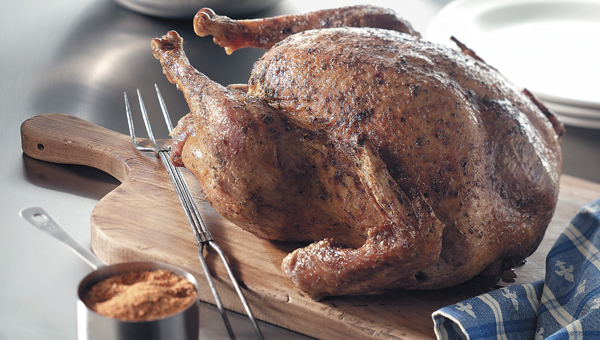 Turkey prices are actually down a few cents this year, but other costs have increased.

A Thanksgiving meal with turkey and all the sides will cost a little bit more this year.

The big-ticket item, a 16-pound turkey, stayed around the same price of $21.65, only dropping less than one-cent per pound, or 11 cents per turkey.

The American Farm Bureau Federation’s 29th annual informal price survey of classic items found that on the Thanksgiving Day, dinner table indicates the average cost of this year’s feast for 10 is $49.41.

“Turkey production has been somewhat lower this year and wholesale prices are a little higher, but consumers should find an adequate supply of birds at their local grocery store,” AFBF Deputy Chief Economist John Anderson said. 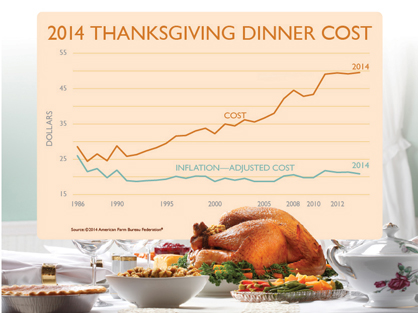 The cost of a Thanksgiving dinner is at an all-time high in 2014.

The AFBF survey shopping list includes turkey, bread stuffing, sweet potatoes, rolls with butter, peas, cranberries, a relish tray of carrots and celery, pumpkin pie with whipped cream and beverages of coffee and milk, all in quantities sufficient to serve a family of 10. There is also plenty for leftovers.

Although the turkey price showed a small decrease, other items on the list were shown to have increased.

“America’s farmers and ranchers remain committed to continuously improving the way they grow food for our tables, both for everyday meals and special occasions like Thanksgiving dinner that many of us look forward to all year,” Anderson said.

“We are blessed to be able to provide a special holiday meal for 10 people for about $5 per serving – less than the cost of most fast food meals.”

The AFBF survey was first conducted in 1986. While Farm Bureau does not make any scientific claims about the data, it is an informal gauge of price trends around the nation. Farm Bureau’s survey menu has remained unchanged since 1986 to allow for consistent price comparisons.