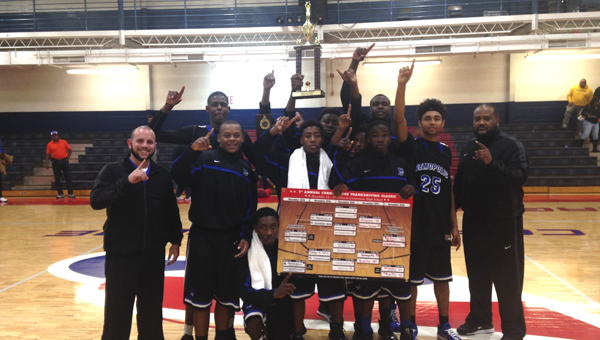 The Tigers defeated Benjamin Russell in the championship game last Wednesday by a score of 73-70.

Moore led the way in the game with 25 points, 9 rebounds and 3 blocks. Xavier Jowers and Demetrius Smith were also in double figures for the Tigers with 11 points each.

Assistant coach Michael Campbell said the difference in the last two games of the tournament was Demopolis’ efficiency from the free throw line. In the championship game, the Tigers went 32-of-39 at the line. 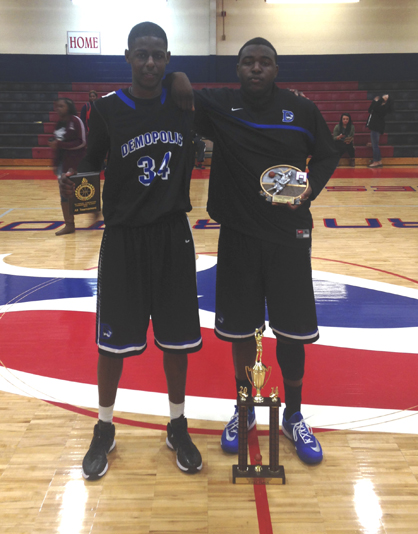 Charles Tripp, left, was named to the all-tournament team, and Josh Moore was named the Tournament MVP.

“We took advantage of our opportunities and knocked down shots,” Campbell said. “Winning this tournament is a huge confidence booster for the team. We struggled in our first game against Selma, but for us to be able to win this tournament with our lack of experience…that’s huge.”

In the first game against Talladega Central, Demopolis came away with a 78-60 win. Tripp had a double-double with 17 points and 14 rebounds, and he also added three blocks and three assists in the game.

Moore had 18 points and 3 boards in the game, while Anthony McIntosh added 12 points and 7 assists. Datrion Fultz had 13 points and 5 assists, and Demetrius Smith had 11 points to round out the Tigers in double figures.

In the second game of the tournament, Demopolis defeated Trinity 52-43. Tripp scored 18 points and had 9 rebounds and 4 blocks to go along with that total. Moore added 14 points and 6 rebounds, and Fultz has 6 points and 7 rebounds.

Campbell said Trinity slowed the pace of the game, which threw Demopolis out of their rhythm.

“They got us out of our comfort zone by slowing down the game, but we converted our free throws down the stretch, which made the difference,” he said.

The three wins give the Tigers a 3-1 record early in the season.