Pete was born on March 10, 1928, in Long Beach, Calif. At the age of 7, he moved with his family to Steele, Mo., then later to Caruthersville, Mo., where he first made his name on the football gridiron. 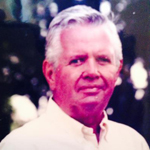 After his high school team won the Southeast Missouri Conference Championship, Pete continued his football career at the University of Missouri. While in Columbia, he also earned membership into Phi Delta Theta fraternity, where he made many close friendships that endured throughout his life.

After college, Pete returned to his hometown to begin a career in farming. A family trip to visit relatives in California led to a chance meeting wherein Pete somehow managed to capture the eye of an exotic beauty from Long Beach, Diana Mary Houts.

After a brief romance (mostly by long distance correspondence), they were married on Jan. 21, 1956, and lived happily together for the remainder of his life.

As a country cotton buyer, Pete and Diana traveled throughout the mid-South, making their homes in Demopolis and Greenwood, Miss.

During this time, Pete had the honor of serving as a director and vice president of the Arkansas and Missouri Cotton Trade Association, was twice elected President of the Greenwood Cotton Exchange, and was a two term delegate to the National Cotton Council.

Ironically, many of Pete’s closest friendships were established with his competitors in the cotton trade. In fact, it was quite common for Pete to spend the morning haggling with a competitor over the price of a cotton recap, then agree to meet him after lunch for a round of golf.

As Pete transitioned into retirement, he found great pleasure working as an instructor for the International Cotton School at the Memphis Cotton Exchange in Memphis, Tenm., (nd later at Rhodes College, where he was able to share his accumulated knowledge and experiences with aspiring young students from around the world.

Though Pete’s time on earth has passed, his colorful personality and zest for life will long be remembered by those who were fortunate enough to have known him. Nobody ever told a better story, or poured a stiffer drink, or took greater pleasure from making others laugh. He will truly be missed.