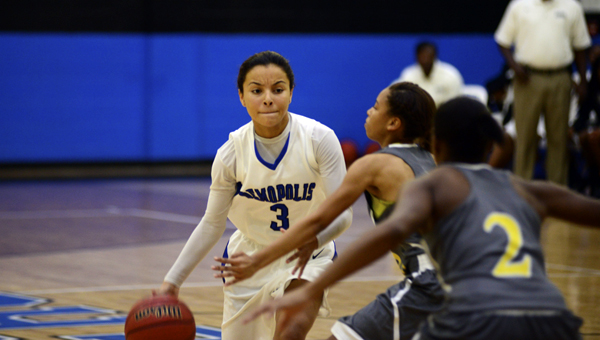 Sylvia Clayton drives into the lane against Choctaw County in Tuesday’s win.

The Demopolis Tigers improved to 4-1 on the season Tuesday night with a 75-64 win over Choctaw County.

Choctaw County led 20-18 after the first quarter, but Demopolis was able to grab a 36-29 lead going into halftime. The visiting Tigers closed the gap in the third quarter to bring the score to 49-48 heading into the final frame.

Both teams played well throughout the fourth quarter, but Demopolis took control late. Leading 65-64 with a minute to play, the home team went on a 10-0 run to close out the game. Jowers hit two tough layups, Tripp went 1-for-2 at the free throw line, Datrion Fultz scored on an old-fashioned three-point play, and Johnny Carter hit a layup to close out the game for Demopolis.

“It was good to get that win,” DHS head coach Rodney Jackson said. “Going forward, we have to execute better and play better. The main thing is improving on defense and getting stops. We’re 4-1 now, and our confidence is growing. We just hope to keep improving.”

In the girls game, the Demopolis Lady Tigers came away with a 66-37 win after overcoming a slow start in the first quarter. 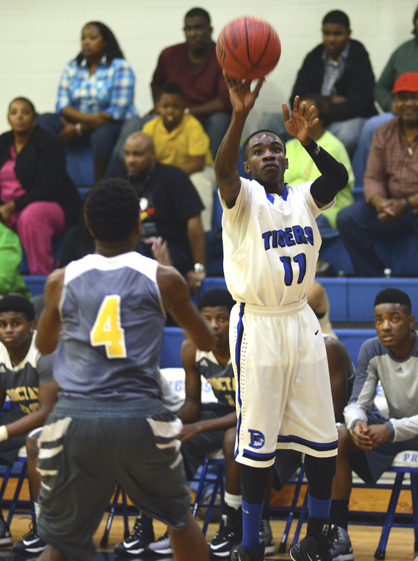 The teams ended the opening frame tied 7-7, and DHS head coach Tony Pittman said the sloppy play goes back to the team’s practices.

“We were really sloppy in the first half, and we weren’t very patient with the ball,” he said. “We practiced like that the last couple days, and it showed tonight. I was disappointed in our leadership in the first half.”

By halftime, Demopolis took a 23-20 lead with Sha’Deitra White leading the way with 7 points and Caleb Washington with 6 points.

The Lady Tigers went on a run to close the third quarter, taking a commanding 44-30 lead. They outscored Choctaw County 22-7 in the fourth quarter to seal the win.

“We made some adjustments in what we were doing at halftime,” Pittman said. “We had some blown assignments that we had to correct. We went on a run at the end of the third to put the game out of reach. We’ve got a lot of work to do before we play Greene County on Friday.” 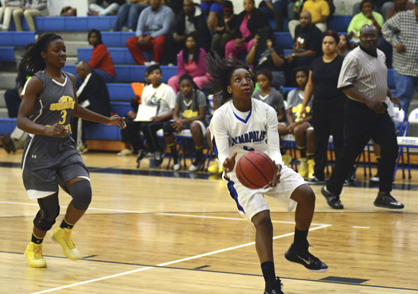 Courtney Hill goes up for a layup.

Washington finished the game with 14 points to lead the Lady Tigers in the win. White and Courtney Hill both had 11 points.

The win for the girls puts their record at 2-2 so far this season.

Demopolis will host Greene County on Friday in the Christmas on the River Classic. The JV boys game will begin at 5 p.m. with the varsity girls and boys game following.