With a quick flip of the switch Wednesday night, Jacob Saelens lit the Love Lights Tree atop Bryan W. Whitfield Memorial Hospital, kicking off the 43rd Christmas on the River festivities.

Saelens, a student at U.S. Jones Elementary School in Demopolis, is this year’s Christmas on the River Special Child.

Linde McAdams, who oversees the special child selection process each year, said the soon-to-be 9-year-old “has always been special to his family” and this year he is the “most special child for Christmas on the River.” 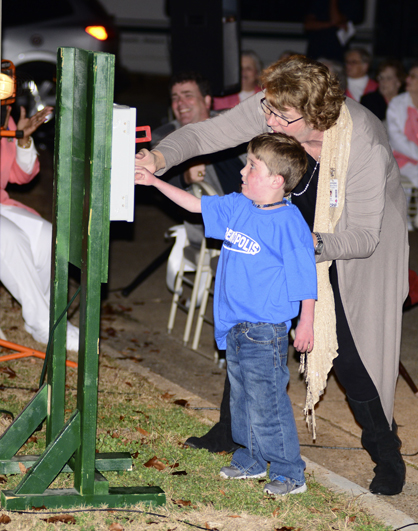 Saelens, the son of Michael and Brandy Saelens, was born with hypoplastic left heart syndrome, a rare congenital heart defect in which the left ventricle of the heart is severely underdeveloped.

During one of his surgeries he had a very serious complication, which caused a blood clot in his leg that led to the need to amputate the leg.

“He now walks and I’ve seen him run with a prosthetic leg,” said McAdams.

Along with lighting the Love Lights Tree, Saelens will also ride on his own float during the Christmas on the River Children’s Parade.

“I could spend a great amount of time sharing with you just how much this Auxiliary means to this hospital and this community,” said Arthur Evans, BWWMH acting CEO. “They support this institution tremendously. The amount of time they volunteer and the amount of funds they use to support to this organization is tremendous.”

Following the lighting of the Love Lights Tree, children from First United Methodist Church sang Christmas Carols. Christmas on the River continues Thursday with the Lighting of Public Square at 5:30 p.m. The event also includes the crowing of St. Nick and the reading of the Christmas story at the Square downtown.