“This is an opportunity for my family and for my girls,” Causey said. “I’ve tried to do this being led by God, and in this profession, you have to do something when the Lord calls you to do it. That’s what this is.”

In eight seasons as the head man at Demopolis, Causey compiled a 67-29 record and captured the 2009 Class 5A State Championship. 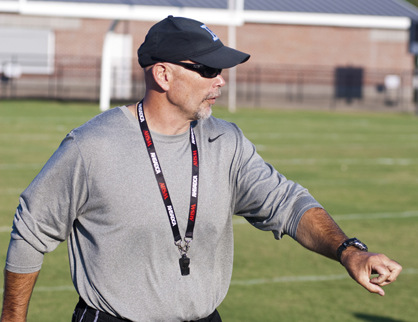 Causey said the decision didn’t come easily for him.

“We’ve struggled with this decision because of the relationship we have with the community, the players and former players,” he said. “My wife and I have prayed a lot over the last two days, and we’re being led by God. This is a move we have to make.”

He added that when he moved to Demopolis, his daughters were in first grade and pre-K, so they’ve grown up in Demopolis.

“The community welcomed us, and it’s been nothing but good things since we got here,” he said. “I’m grateful for all the love and hospitality that has been shown to me and my family. You can’t do what we’ve been able to do here without the full support of the community, the parents and the teachers, and that’s what we’ve had. The teachers are involved with these kids, and the parents sacrifice so much for them to be a part of this program. I’ll be forever grateful for their support.”

Demopolis Principal Tony Speegle had nothing but high praise for Causey’s time at the school.

“My son played for him, and I’ve had the privilege to be his principal for two years,” he said. “I can tell you that he runs a high quality program and turns these young guys into young men. He instills the qualities in them that you want to see as a parent to make them not only quality athletes, but quality men.”

Speegle added that a testament to Causey’s work is how the players that have the opportunity to play football beyond high school finish that out.

“When his players have a chance to play at a college or university, they get there and make the most of it,” he said. “His wisdom and guidance make a difference, and those players finish what they start at the college level. And there’s also not a lot of coaches out there that hold Bible study for his coaches and his players.”

Causey leaves behind a team that finished 8-3 and was the Class 5A, Region 4 champion.

In addition to football, Causey was selected as the 2011 St. Nicholas as part of the Christmas on the River celebration for his commitment to the welfare of children. Causey was also helped create the Demopolis Youth Football League, which had its inaugural season in 2008.