The softball recruiting process begins earlier than in most sports, and Latham said she’s fortunate Ole Miss reached out to her when they did. 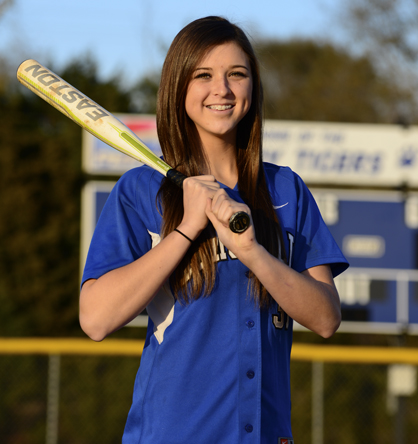 “It’s getting close to the end of their recruiting period, so I was glad I attended their camp last weekend,” she said.

While at the camp in Oxford, Latham caught the attention of Ole Miss coaches.

“During my first conversation with one of the assistant coaches, they told me they had head a lot about me,” she said. “They knew about me already, and they were friendly and gave me attention during the camp. They acted interested in me.”

“They told my coach to have me call him, so that’s what I did,” she said. “We talked about the camp, and when he made the offer, I was really happy. We had a short conversation about our excitement and that was it.”

Latham said she plans to improve on her impressive freshman season over the next three years.

“I’m glad I know so early where I’m going to go so I can learn more about the game and continue improving,” she said. “I’ve got time to improve and go to their camps. I’m going to keep working hard to get better.”

Campbell said her commitment is also a big step forward for the program as a whole.

“This is huge for our program,” he said. “Abbey has worked hard, and because of that, it will bring us more recognition from the collegiate level. With the classes we have coming up and the talent we have, we hope to get more looks for our girls.”

Campbell said he knew when he started working with Latham as an eighth-grader that she would be special.

“When she came in in eighth grade, I knew she’d be special,” he said. “Hopefully this will help the other girls realize their goals are attainable if they work hard at it like Abbey has. I couldn’t be more proud of her. I’m really glad she has this opportunity.”

As a freshman, Latham batted .420 with 18 doubles, two home runs, 28 RBIs, 28 runs scored and 24 stolen bases. She was an Honorable Mention for the All-State team in 2014. She is the daughter of Jeff and Melissa Latham.