Tigers pull off upset over Thomasville 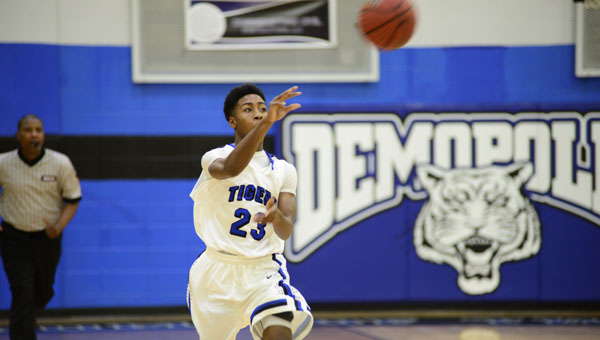 Anthony McIntosh passes ahead to a teammate in Thursday night’s 64-60 overtime win over Thomasville.

The Demopolis Tigers (7-3) overcame a 13-point second quarter deficit to force overtime and defeat the previously unbeaten 4A, No. 6 Thomasville Tigers on Thursday.

Demopolis, who struggled at the free throw line through the first four quarters, went 8-of-10 from the line in overtime to help lift them to a 64-60 win.

“Our guys, they wanted to win for themselves, for their families and for their city,” DHS head coach Rodney Jackson said. “In overtime, the guys stepped up with ice water in their veins and knocked down their shots.”

Demopolis took its final lead of the game with 2:40 to play in overtime when Demetrius Smith knocked down two free throws to put DHS up 56-55.

With 1:54 to play, Anthony McIntosh hit one of his two free throw chances to give Demopolis a 58-55 lead.

Smith put the game out of reach for Demopolis when he drove down the lane and hit a runner to give DHS a 60-56 lead with 1:12 to play.

In the final minute of the contest, McIntosh and Datrion Fultz each hit a free throw while Smith went 2-for-2 at the stripe on his final trip. 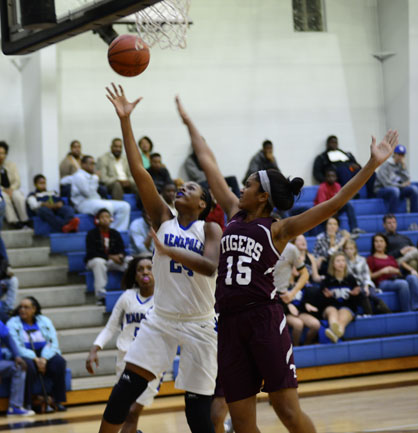 Caleb Washington goes up for a layup against Thomasville. She led the way for Demopolis with 14 points in the game.

Thomasville built a 16-9 lead in the first quarter, and at the start of the second, pushed it to 13 points. Demopolis started chipping away at the lead, and Jackson said he told his team they needed to get the deficit down to single digits by halftime. They were able to do that, and trailed 30-23 at the break.

“The players felt good going into halftime,” Jackson said. “They felt like they were the better team and knew what they had to do to take a lead and win the game.”

In the third quarter, the home Tigers went on a run to take a lead, and after three, Demopolis was ahead 39-37.

“We just chipped away. Even though we were down, we were getting good looks and they were hitting everything,” Jackson said. “We just wanted to chip away, get stops and try to contain (Ryan Calhoun).”

Demopolis led late in the game, but Calhoun, who finished the game as the leading scorer with 26 points, hit a jumper to tie the game at 52.

Smith led the way for Demopolis with 17 points, while McIntosh added 13 points to go along with 7 rebounds and 3 steals.

In the girls game that preceded the boys, Demopolis dominated Thomasville from start to finish.

Demopolis led 12-0 after the first quarter and took a 29-3 lead into halftime.

Thomasville was able to score a few buckets in the third quarter, but Demopolis still stretched the lead to 47-14 after three.

By having a 30-plus point lead after the third quarter, there was a running clock in the fourth. Demopolis and Thomasville each scored 6 points in the fourth for a 53-20 final.

Caleb Washington led the way for Demopolis with 14 points and Shakesaney Bell added 11 points. For Thomasville, Shakira Campbell led the way with 8 points.