Kennedy was named the Chamber’s director in November 2013. 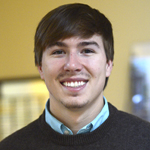 He informed the executive committee of his decision a couple weeks ago, and he sent a letter to Chamber members Monday.

“I’ve enjoyed everything with the Chamber,” Kennedy said. “Demopolis is a special place, and the people here make it even more special.”

He added that the opportunity to work at the Chamber allowed he and his then-fiancé and now wife, Hannah, to live in the same town and start their lives together.

Kennedy came to Demopolis from Monroe, La., where he worked as a sales and service consultant with The Aspire Group, an organization that does work with the University of Louisiana at Monroe.

“I feel like we came in not really knowing what to expect, but we were able to figure out the direction we wanted to go,” he said. “We knew Demopolis had a lot to offer, and we wanted to capitalize on that. I think we were successful, despite having a few hiccups. Those gave us opportunities to learn and get better.”

Kennedy has accepted a position at Linden Lumber, so he and his wife will be staying in the area.

Chamber Board of Directors Chairperson Aretha Muhammad said the board will hold its regular monthly meeting next week, and she hopes the board can find a replacement in the near future.

“He’s done a good job, worked hard and brought in new membership,” Muhammad said. “He was new for Christmas on the River in 2013, and I thought he did a good job that year and in 2014 as well. We will miss him, and we wish him the best in the future.”