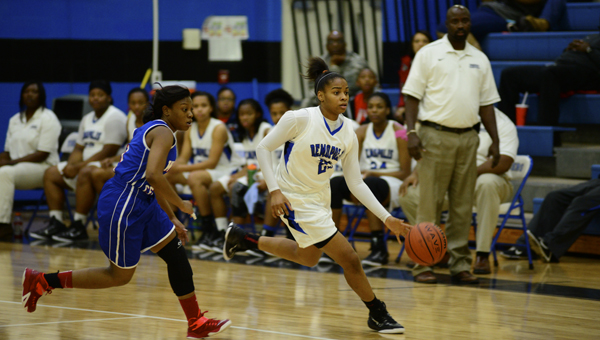 Demopolis’ Ivery Moore brings the ball up the court for the Lady Tigers in their 47-40 loss to Wilcox Central on Tuesday.

Wilcox Central presented a challenge to open area play for both the Demopolis boys and girls basketball teams Tuesday night.

The Lady Jaguars came away with a 47-40 win over the Lady Tigers, and Wilcox Central’s boys team defeated Demopolis 73-60.

Both teams started slow in the girls game, resulting in a 12-9 Lady Jaguars lead at halftime.

Turnovers and missed opportunities by both teams were a large part of the slow starts.

In the third quarter, both teams came out of the locker room having corrected some of their mistakes. Demopolis outscored Wilcox Central 21-13 in the quarter to take a 30-25 lead into the fourth. 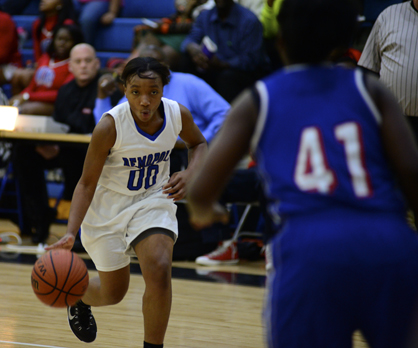 Traqueshia Vaughn drives into the lane against Wilcox Central.

The Lady Jaguars went on a run to open the fourth quarter, and Demopolis wasn’t able to match it. Wilcox Central had the biggest quarter of the game for either team, scoring 22 points to take the 47-40 win.

Sylvia Clayton led the way with 14 points and Caleb Washington added 10 to round out the Lady Tigers in double figures.

The loss drops the Lady Tigers to 0-1 in the area.

In the final game of the night, the Tigers and Jaguars kept things close through two-and-a-half quarters before Wilcox Central began to pull away.

Demopolis got off to a hot start with Charles Tripp scoring the first eight points of the game, and 10 of the team’s first 15 points. At the end of the first quarter, Demopolis led the Jaguars 15-14.

The Tigers stretched their lead to start the second quarter, but Wilcox Central came storming back to take a 26-24 lead going into halftime. Xavier Jowers scored seven of Demopolis’ nine points in the quarter. 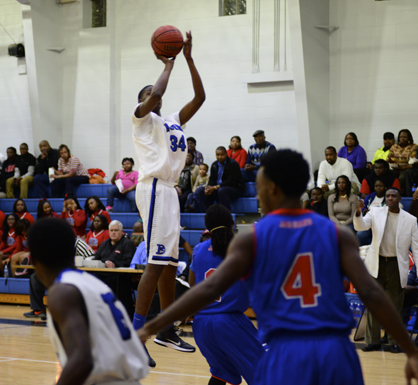 Charles Tripp takes a shot against Wilcox Central. He led the way for the Tigers with 22 points in the loss.

Demopolis was able to close the gap as the game drew to a close, but Wilcox Central kept their double-digit lead for a 73-60 win.

Tripp led the way for the Tigers with 22 points. Demetrius Smith was the only other Tiger in double figures with 12 points.

Demopolis will be back in action Thursday night on the road at Greene County, then they will return to area play Friday on the road at Sumter Central.

The Tigers’ next home game will be Tuesday, Jan. 13, against Dallas County.