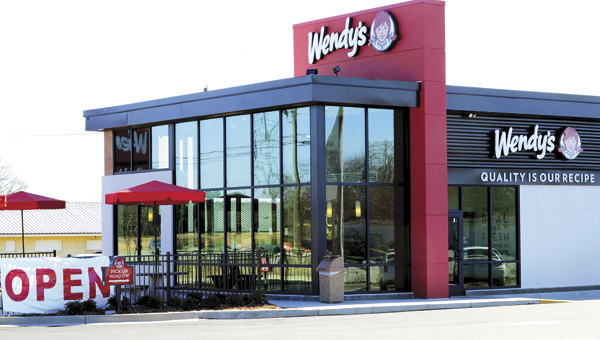 Wendy’s opened in Demopolis just prior to the start of 2015. Mayor Mike Grayson said the city’s top priority in the upcoming year will be to attract even more businesses to the area.

“The No. 1 goal is that we have got to have economic development,” Grayson said. “That sounds so trite to say that … but we’ve got to do that. I’m frustrated in the sense that we have not been able to get anything that we have worked on that would be sizeable. Now certainly we’re grateful and blessed that we’ve had new businesses come out of the ground like the new Wendy’s and the local investment like Parr’s doing what they have done (with their new station), but we need something of a manufacturing or industrial nature.”

Grayson cited the arrival of Gulf States Paper, now Rock-Tenn, to the area in the late 1950s as the type of development the area needs.

“That was a game changer,” he said. “We are positioning ourselves for another game changer, but being somewhat of an impatient person, I’m ready for that to happen.”

Grayson said the Demopolis Port could be a key to attracting a major industry.

The 100,000 square-foot building at the port was built in the 1980s, but it was never developed as intended. With it being behind the airport, near the river as well as two separate railroads, it could serve as a great hub for large businesses.

Grayson also said downtown revitalization will be a priority in 2015.

“That’s not so much city as we’ve got to get private investors to come here,” he said. “The Retail Coach is one of the steps we’re taking.”

In December, the Demopolis City Council along with Demopolis Area Chamber of Commerce, the Marengo County Industrial Development Board and the Demopolis Area Business Council entered into a contract with The Retail Coach. The Retail Coach is a national retail consulting, market research and development firm that aims assist to local governments, chambers of commerce and economic development organizations in recruiting retail businesses to the area. The contract will be worth $25,000. The city will pay $10,000 with each of the other organizations contributing $5,000.

“We aren’t motionless,” he said. “We’re doing things, but it just doesn’t count until you get results.”

Grayson said he also believes the city could benefit from an expansion of the Demopolis Civic Center.

“I’d like to see us convert our civic center to a conference center,” he said.

Grayson said that since he took office in 2008, a number of organizations have approached the city about using the civic center for their annual meetings, but it has often lacked the necessary space and amenities.

Grayson said he envisions a conference center with a hotel, restaurant, lounge, conference room capable of seating 350 and breakout rooms.

He said in order to make the expansion a reality the city would need to form a partnership with private investors.

“I think it would be a destination point that we could market,” Grayson said.

“Plus having that type of facility would be a benefit when we have industrial prospects visit the area. Not too many places have a facility like that.”