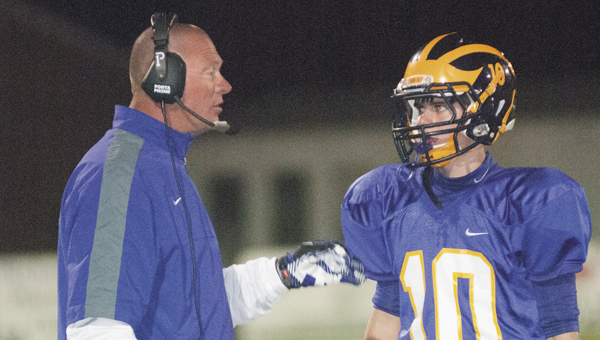 Stacy Luker has been named the next athletic director and head football coach at Demopolis High School.

The Demopolis Board of Education approved the hire in a called board meeting Friday afternoon.

Luker comes to Demopolis from Neshoba Central High School in Mississippi, where he spent one season. Before taking over at that program, he led the Sweet Water Bulldogs to five state championships in 12 seasons, compiling a record of 131-32 over that stretch.

“When this job came open, I was interested because it was Demopolis,” Luker said. “It’s a top program in the state, and it’s a highly sought-after position. I was highly interested when it came open.”

The position opened up on Dec. 17 when Tom Causey accepted the head coaching position at Pelham High School. Since the job opened, DHS principal Tony Speegle conducted interviews to make a recommendation to the board.

“It is important for Demopolis to have a coach to build upon the tradition that is Demopolis football,” Speegle said in a recommendation letter to the board. “It is important to have a coach that embodies the values and character that we want instilled in our athletes, our student body, our sons and daughters of Demopolis. A coach that will lead by example and contnue the current traditions of having a Bible study for coaches and players as well as “team meals” with the churches on Thursday nights.”

Speegle added that it’s important for a coach to help athletes pursue a college education as much as he helps them succeed on the field.

Luker said coming into a program like Demopolis is something he hasn’t done before.

“I’m excited to be here,” he said. “It’s good to walk into a program that isn’t broken, and just about everywhere I’ve been before has been broken in some way. Coach Causey and (Doug) Goodwin built this program, and they have left it in good shape. Being at Demopolis gives you a chance to win a state championship. At Demopolis, you play for state championships, and we don’t expect to change that.”

Luker brings with him the Wing-T offense that he’s had so much success running in the past.

“You set yourself up for failure any time you try to change things too much,” he said. “The good thing is that the previous offense here and our offense are both run-oriented, so it will fit in well with the players. You have to throw the ball, too, and we’ll be able to do that as well.”

Demopolis Superintendent Al Griffin said he’s known Luker professionally since he started at Demopolis and is glad to have him as Demopolis’ next coach.

“What I know about Stacy Luker is that he is a Christian family man, he has more than 25 years of experience as a teacher and a coach, he’s had almost unparalleled success on the field, and he’s highly respected in this community and across the state,” he said. “When he takes over somewhere, he’s committed to that area, and he doesn’t move around a lot. I like that. I’m convinced that we’ve made an excellent hire, and I encourage the community to embrace him and his family.”