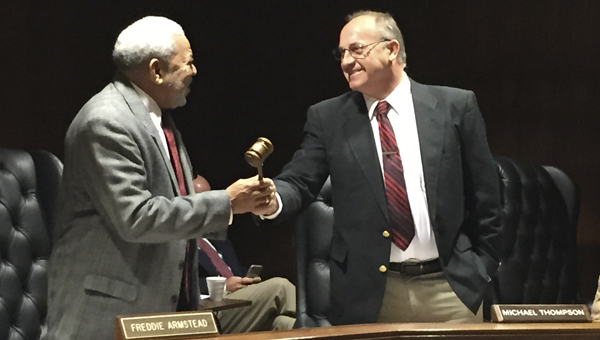 The Marengo County Commission voted Tuesday morning to transfer the Community Safe Room Grant to the City of Thomaston.

The county applied for and received the grant several years ago, and Marengo County EMA director Kevin McKinney said the time to act on the grant ends in October. The county would have to pay at least $280,000 to build a shelter, and then the state would reimburse them after the invoice was sent. The commission decided there were more pressing projects the money could be used for in the county.

The City of Thomaston and Mayor Jeff Laduron sent a letter to the county recently stating that they would like to take on the grant to build a shelter that would double as a community center. The commission agreed to allow Thomaston to use the grant and for the county to serve as the grantee.

McKinney said the county could apply for the grants again during the next grant opening, which he expects to be within the next year.

“We can’t afford to spend that kind of money then have to wait six months for reimbursement,” Commission Chairman Freddie Armstead said.

“I think we should allow Thomaston to have a chance to use it. We all want to be able to use it, but I’m not sure we can right now.”

With this being the first meeting of the new year, the commission chairman always passes the gavel to another commissioner. This year, Armstead takes over for Michael Thompson, who served as chairman in 2014.

During Tuesday’s meeting, the commission also heard from Butch Grimes of Grimes Architecture in Tuscaloosa about the heating and air conditioning in the courthouse. Grimes has worked with the Demopolis City Schools System on energy-efficient projects recently, including new lights in the school gyms, as well as the geothermal HVAC project at Demopolis High School that is ongoing.

Grimes asked the commission to consider hiring his group of engineers to survey the courthouse grounds and put together a report that details what improvements can be made and the potential energy savings they would create. The commission said they would consider it and vote on it at a later time.

The commission also took the following action during the meeting:

•Approve expenditure for “Coffee at the Courthouse” with elected officials. The meeting will be held with local officials, as well as members of the state legislature.

•Approve the User Fee CD from Sweet Water State Bank at a rate of .75 percent

•Adopt a resolution from the Association of County Commissions of Alabama to display the words “In God We Trust” in the commission chambers.

The resolution states that displaying the slogan in the commission chambers is a way to “solemnize public occasions and express confidence in our society.”