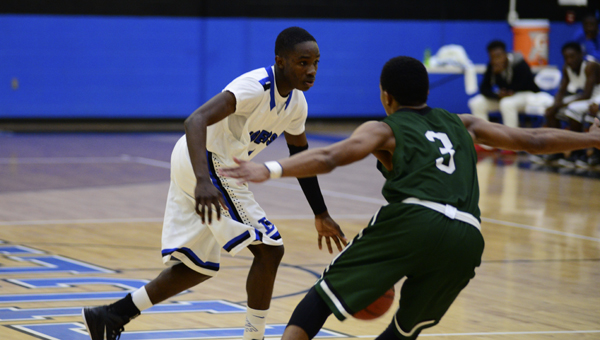 Demopolis’ Demetrius Smith tries to get around a Dallas County defender in Tuesday night’s loss to the Hornets.

Despite their best efforts, the Demopolis Tigers were unable to overcome an early deficit Tuesday night at home against Dallas County.

The Hornets used an aggressive attack in the first quarter to jump out to a 20-6 lead, and they were able to withstand a couple of runs by Demopolis to hold on for a 60-52 win.

Dallas County assistant coach Cliff Nix said the Hornets got sloppy in the second half, allowing Demopolis to get back into the game.

“We were passing it and moving it around well in the first half, but we started slacking in the second half,” Nix said. “Demopolis picked up their intensity, and we stopped playing defense like we had in the first half.”

After an explosive first quarter, the Hornets were held to nine points in the second quarter, and Demopolis went on a run to close the half. The teams went into the locker room with the Hornets leading 29-14.

In the third quarter, Demopolis forced the Hornets into some uncharacteristic errors, allowing the Tigers to cut the lead to 35-31 with three minutes to play in the quarter.

Dallas County closed the quarter on a 9-1 run to take a 44-32 lead into the fourth quarter.

Demopolis outscored the Hornets in the fourth, but it wasn’t enough to overcome the deficit.

“We started moving the ball better and making some shots, and I felt like the press was working for us,” Jackson said.

With the loss, Demopolis drops to 0-3 in area play, but Jackson felt like his team has had a chance in each of the losses.

“I keep telling the guys we have to start fast and finish strong,” he said. “We know we can win on any given night, and I feel like we’re close. Our chemistry is getting better. Our focus is on getting better for the area tournament. That’s when it really matters.”

Jerrod Moorer Jr. and Keyonis Phillips led the way for Dallas County with 17 points each. Also in double figures for the Hornets was Javaris McGuire, who ended the game with 10 points.

For Demopolis, Charles Tripp led the way with 20 points and 6 rebounds. Xavier Jowers added 13 points, while Josh Moore added 8 points and 7 rebounds. Demetrius Smith scored 9 points and had 6 assists to add to that total.

In the girls game that preceded the boys, Demopolis held Dallas County to single digits for a 57-8 win.

Sha’Deitra White goes up for a layup in Tuesday night’s win over Dallas County.

Demopolis head coach Tony Pittman said he’s looking for a group of players he can turn to when the Lady Tigers need to pick up the tempo.

“We’re searching for five girls to work together and pick up the tempo for us,” he said. “The five that started the game were able to do that and pressure them into turnovers. We’re just looking to play better each game. By the area tournament, we should be where we need to be.”

Demopolis jumped out to a 17-2 lead in the first quarter and took a 41-6 lead into halftime.

A running clock throughout the second half slowed the scoring for Demopolis, but the Lady Tigers were able to hold the Lady Hornets scoreless in the third quarter. After three, Demopolis led 51-6 with mostly freshmen and sophomores on the floor.

“This gave us an opportunity to work on things we wanted to work on,” Pittman said. “We were able to give some of our younger players a chance to get some playing time. I’m glad to seem them get the opportunity to play.”