A second man has been arrested in connection with the high speed chase that led officers from Demopolis to Selma last week. 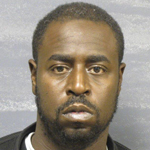 Frieson and Audre Jerome Hendon allegedly broke into SunSouth in Demopolis and stole numerous items. According to police, Hendon and Frieson threw stolen chainsaws at officers during the chase to slow them down or to cause an accident.

DPD Chief Tommie Reese said investigators from his department traveled to Birmingham on Tuesday and made the arrest. Reese said Frieson fled the scene when the chase came to an end in Selma last week.

Reese added that other charges could be forthcoming from other departments. He said he is proud of the work of his officers in this case.