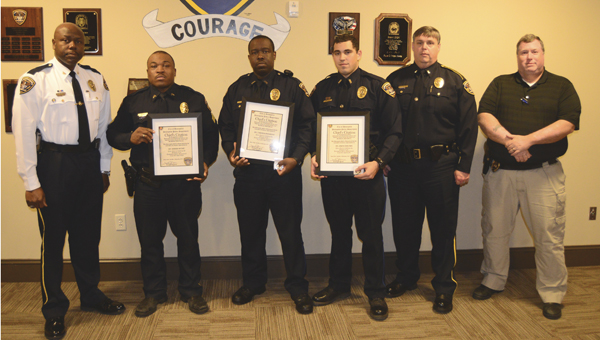 The three Demopolis police officers involved in the chase two week ago that involved chainsaws being tossed at the pursuing officers were honored Tuesday morning with Chief’s Citations from DPD Chief Tommie Reese.

Reese said the Chief’s Citation is a plaque that recognizes exemplary service, and that it’s something that not every officer receives.

“This is a special honor for our officers,” he said. “I want to recognize these men for their exemplary service on the night of the burglary, pursuit and capture of one individual, and later a second individual. They fulfilled their mission of taking care of the city of Demopolis.” 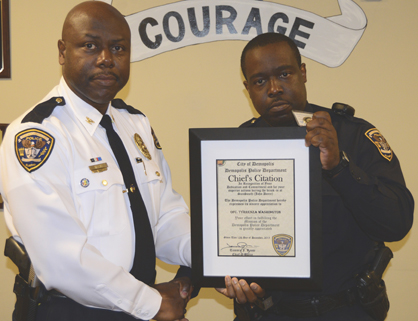 Reese said Washington was the officer who initially heard the alarm coming from SunSouth, even before 911 reported the alarm to the officers on duty.

“Officer Washington heard the alarm before ever getting a call about it, and he went to check it out,” Reese said. “When he got there, he saw the suspects running out of the building with stolen merchandise and leaving the premises in a van. He gave chase, which led to an arrest.” 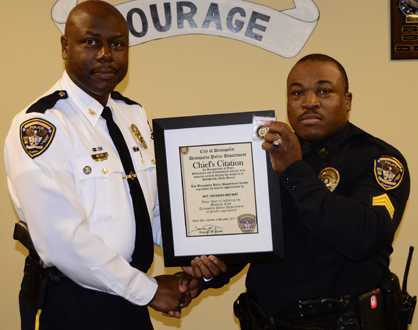 The suspects have also been linked to 15 other burglaries across the state, and so far, $375,000 worth of stolen goods have been recovered. 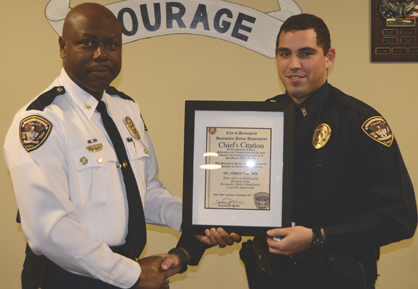 “I want to salute these officers for doing their job, even at 4 in the morning when their shift was going to end in a couple hours,” Reese added. “They were alert enough to hear the alarm and go check to see what was going on. I’ve got nothing but praise for what they did.”