The 17th Judicial Drug Task Force has welcomed a new member to its ranks.

Taz, a Belgian Malinois, finished his training with the Alabama Canine Law Enforcement Officers Training Center in Tuscaloosa. Task Force Commander Clint Sumlin decided he wanted to be a K-9 handler again, so with the help of private donations, he purchased Taz to join the Task Force. 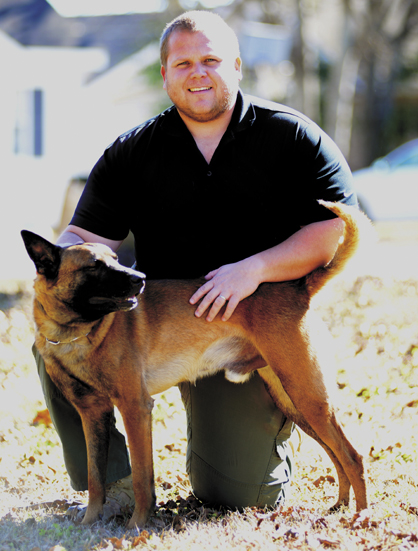 “We needed another dog on the Task Force, and I missed having one,” he said. “Nobody else wanted to be a handler, so I decided to get one myself.”

Adding Taz to the Task Force gives them two full-time dogs and a part-time dog. Taz is a dual-purpose dog that can find narcotics as well as chase and apprehend suspects.

“Having another dog will help when only one of our handlers are working,” Sumlin said. “It allows us to have more coverage, plus we can aid if there is an escaped prisoner, a missing child or anything like that.”

Currently, the only departments in the Task Force’s tri-county area with dogs are the Demopolis and Linden police departments. Adding another dog will be of benefit for Marengo, Sumter and Greene counties, according to Sumlin.

During training in Tuscaloosa, Taz worked with Ricky Farley, who has trained dogs for police departments across the country, as well as military units.

“Ricky is the man,” Sumlin said. “He’s one of, if not the best law enforcement dog trainers in the world. The training for a dual-purpose dog takes eight weeks, and he is there to help year-round if the dog or the handler need refreshers. We also have to get recertified each year with the dogs.”

Sumlin said he chose a Belgian Malinois because of the breed’s high drive.

“My last dog was a Labrador Retriever, and it’s a whole different experience with a Malinois,” he said. “They’re harder to handle because of their high drive, but they make great law enforcement dogs. I’ve never had a dog that can track, so I’ve never experienced that kind of training. I like Taz because he’s not quite as restless as other Malinois I’ve seen, but he’s also fast and bites hard.”

Sumlin said drug dogs alert to the odors of narcotics, and Taz can alert to smells of cocaine, marijuana, ecstasy, heroine and methamphetamines.

Taz was purchased through donations from J.R. Rivas at Personal Touch, Hugh Overmyer at Linden Lumber and Cemex.

“I want to thank them for their service, allowing us to have this valuable asset,” Sumlin said. “Just to buy the dog, it costs $15,000, then you have to buy equipment. We couldn’t have done it without these donations.”

Rivas said when the Task Force was started, he wanted to make sure he helped as much as he could.

“At one point, it looked like the Drug Task Force might disappear, but with some help, District Attorney Greg Griggers was able to re-fund it,” Rivas said. “It has been a success ever since. Their criminal investigations on the interstate help bring in revenue, and I think the funding of a dog will help the entire circuit. And if a dog is needed in a different circuit, it’s a good tool to put to use. I encourage other business owners to do the same and support our law enforcement.”