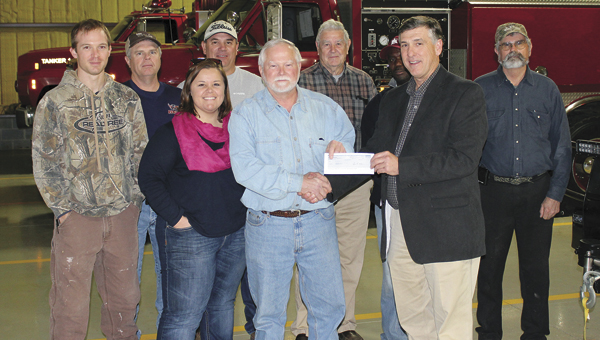 The Jefferson Volunteer Fire Department has received a $5,000 grant from the Georgia-Pacific Bucket Brigade for the purchase of new personal protective equipment.

Jefferson is one of only seven departments in Alabama and only 50 across the United States to receive the award for the 2014 grant year.

The grant award was presented by Naehola mill manager Ronnie Hall at JVFD’s Thursday night station meeting. Hall commended the department for its service and said that GP wants to do all that it can to support communities and departments like Jefferson.

“Every year, Georgia-Pacific receives hundreds of grant applications from volunteer fire departments, often requesting very basic items to do their jobs,” Hall explained. “I’m very happy that the Jefferson VFD was chosen as a recipient this year. It’s critical that we help meet the needs of first responders who are in harm’s way and make our communities safer every day.”

Founded in 2006, Georgia-Pacific Bucket Brigade provides support that includes grants co-sponsored by the Georgia-Pacific Foundation and local Georgia-Pacific facilities, educational materials to help spread the word about fire safety especially to children, and memberships for all grant applicants to the National Volunteer Fire Council (NVFC).

Grant awards and amounts are determined based on the severity of the units’ needs, the impact a grant may have, and the uniqueness of the submitted story.

Jefferson’s story is one of growth and progress, having received a much-improved ISO rating of 6/6X in the summer of 2014, up from an 8/9 rating from the previous inspection. Membership has more than tripled in the last 18 months, giving an added sense of protection and peace of mind for the small community.

JVFD Chief George Norris is pleased with the department’s work and the commitment the members have shown to volunteering time and talent for service to the community.

“It takes a lot of time, effort, and funds to maintain a department,” he said. “We’re fortunate to have a good group of members with a lot of different talents. They have mechanical, electrical, engineering, medical and safety experience, and those all come together smoothly for us. Our trucks and equipment require routine maintenance that can now often be done in-house, as can several other tasks, and we are all learning from each other. We have a good team.”

Norris said that the funding from Georgia-Pacific will allow the department to purchase much-needed safety gear for firefighters.

“The turnout gear that we have now needs to be replaced, and being able to buy new protective gear for our firefighters who work so hard to train and prepare will give them the support and added safety that they need to continue to serve our community,” Norris explained. “Safety is our top priority, and we can’t expect our firefighters to put themselves in unnecessary danger by not having the gear they need.”

JVFD strives to equip trained volunteer firefighters with a robust set of gear that includes primarily a jacket, pants, gloves, helmet, boots, and a hood. A full set of this clothing can cost a few thousand dollars on average.

“We’ve had some used gear donated in the past, and we’ve been able to buy a few new pieces, but this support from Georgia-Pacific will give us a boost to replace some of the worn-out gear and add some new pieces that we have needed for a while,” Norris said.

A major step for volunteer firefighters is having the confidence to enter a dangerous situation. Through extensive training and provision of safety gear and education, which Jefferson requires for all of its firefighters to approach an emergency scene, that confidence can be built.

“We have a heavy focus on training in our department,” Norris said. “All of it centers around safety and the best ways for us to control a fire while keeping our fellow firefighters safe. From our driving training to pump training and everything in between, we know that the most important thing we can do is look out for each other and the people we are trying to help. We work together to learn our strengths and weaknesses, and that’s how we approach a scene, by knowing who is most comfortable with each part of the response.”

Norris said that although there are not necessarily specific duties assigned by default to JVFD firefighters, each has a task that they are probably more comfortable and confident in doing.

“We try to remind ourselves to not be overconfident, though,” Norris continued. “One of our guys has said several times that there’s no place for Superman’s cape at the scene of an emergency, and that’s true because we all need a certain level of fear and respect for fire to keep ourselves safe.”

JVFD meets the first and third Thursday of each month at 6:30 p.m. To learn more about the department or to show support for its volunteers, follow the group at Facebook.com/JeffersonVolunteerFireDepartment.