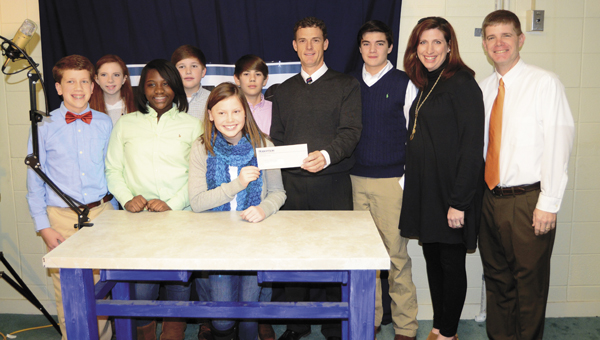 DMS began the program in the spring of 2013 with just a few pieces of equipment and a lot of determination.

Under the leadership of DMS teacher Meggin Mayben, Tiger TV is on its way to producing professional-quality broadcasts.

On Tuesday, the broadcast team was presented with a $1,000 check from Robertson Bank to help fund the airtime for the broadcasts.

The broadcasts are streamed live on the Demopolis Middle School website, accessible from www.dcsedu.com. The streams are done at 7:52 a.m. each day.

The broadcast team is also beginning to branch out and trying their hand at commercials and advertising to raise funds for equipment and set pieces. Robertson was their first advertiser.

DMS Tiger TV will display the Robertson Banking Company logo and produce a 1-2 minute commercial for the shows.

Broadcast team member Larson Jackson said she likes being able to inform the DMS student body about upcoming events at the school and in the community.

Another broadcast team member, Joseph Barnes, said his favorite thing about the class is that he “gets to learn about different technologies.”

DMS principal Blaine Hathcock said the school has to pay for airtime for the broadcasts, and the donation from Robertson should cover the costs for the rest of the school year.