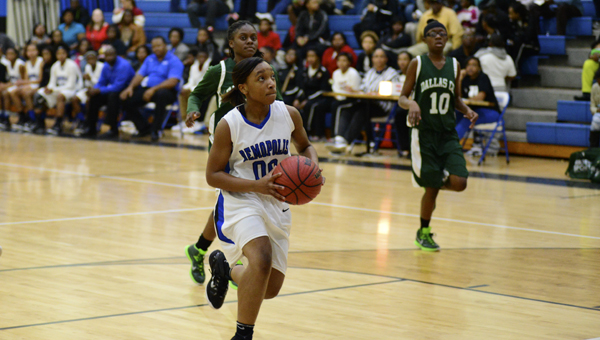 Shakesaney Bell drives into the lane for a layup in Demopolis’ 48-21 win over Dallas County in the Class 5A, Area 6 tournament. She led Demopolis in scoring with 15 points.

The Demopolis Lady Tigers used a big first quarter against Dallas County in the first round of the Class 5A, Area 6 tournament to come away with a 48-21 win over the Lady Hornets.

Demopolis jumped out to a 21-1 lead in the first quarter and never looked back.

“We wanted to come in and execute on offense and play aggressive defense,” Demopolis head coach Tony Pittman said. “We knew we wanted to put the game out of reach early.”

By halftime, the Lady Tigers had built a 32-8 lead, and Pittman was able to rest his starters for the majority of the second half.

After being outscored by the Lady Tigers 13-1 in the third quarter, Dallas County finished the game on a high note, winning the fourth quarter 12-3.

“We’ve been facing adversity all season long, but our girls kept fighting, no matter what,” Dallas County head coach Charles Thompson said. “We started the season with 13 players and ended it with 13 players, and I’m proud of that. We came out tonight determined to give a good team a good game. I’m proud of what we accomplished. We’re a young team and we’ll get better. We’re going to take a couple weeks off then get back at it and get ready for next season.”

Shakesaney Bell was the leading scorer for Demopolis with 15 points in the game. Ivery Moore was the next-highest scorer with 7 points, followed by Darneshia Harris and Sylvia Clayton with 6 points each.

With the win, Demopolis earned a spot in the area championship game Friday night against Sumter Central. The game will tip off at 7 p.m.

Earlier in the night, Sumter Central was able to hold off a furious comeback by Wilcox Central for a 58-53 win.

Treionna Hudson led the way for Sumter Central with 16 points, followed by Sarahi Jemison and Tanajisia Sewell with 12 points each.

Quanisha Bridges was the high scorer for Wilcox Central with 14 points. Mychel Jackson and Jamaya Miller each added 10 points in the loss.