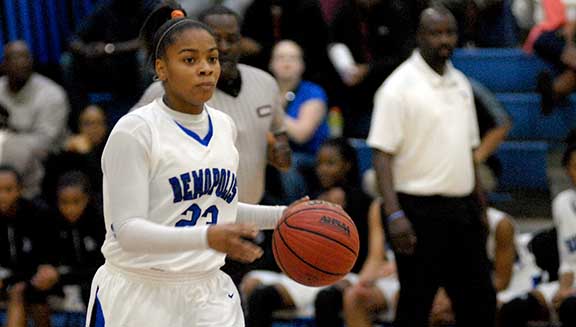 Demopolis High School’s Ivery Moore scored five of her seven points in the fourth period, including four in the final 39 seconds to help propel the Lady Tigers to a 31-30 win over Sumter Central High School in the Class 5A, Area 6 title game Friday night in Demopolis. (Times Staff/Andy Brown)

The DHS standout scored five of her seven points in the fourth period, including four in the final 39 seconds to help propel the Lady Tigers to a 31-30 win over Sumter Central High School in the Class 5A, Area 6 title game.

For her efforts, Moore was named the tournament’s MVP.

But following the game, Moore said it is DHS head coach Tony Pittman who deserves the credit for her on the court heroics because of the way he pushes her to be her best.

For his part, Pittman never doubted Moore would deliver in crunch time, even after Sumter Central managed to hold her scoreless in the first half thanks to its 1-3-1 defense.

With 39.4 seconds to play, and the Lady Tigers trailing 28-27, Moore was fouled sending her to the free throw line with a chance to put her team on top.

“As she was going to the free throw line, I just said, ‘Big players make big shots. It’s your time.’ She stepped up and she knocked them down,” Pittman said.

Moore connected on both giving the Lady Tigers a 29-28 lead.

The lead was quickly erased, however, when Sumter Central’s Treionna Hudson drove into the lane for a layup and a 30-29 lead.

At that moment, Pittman made perhaps the most important decision of the night. Rather than call a timeout, he let the Lady Tigers attack.

“They hit the shot and I was debating whether I should call timeout but we were in a flow,” Pittman said. “That game was in an even flow.”

The move paid off.

With just under 10 seconds to play, Moore drove into the lane and hit her only field goal of the night to put Demopolis back up by one point.

A Sumter Central turnover on the ensuing possession gave the Lady Tigers the ball back and the win.

“It’s hard to beat a team four times in a row throughout the year. Each time we played them, they just got better,” Pittman said. 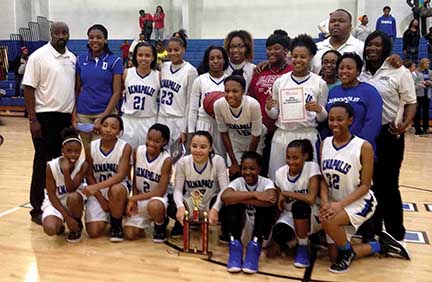 Early on it looked as though the Lady Jaguars might finally best the Lady Tigers.

Sumter Central outpaced DHS 8-0 in the first stanza and closed the opening half with a 10-3 lead.

“I saw a basketball team that was really pressing,” Pittman said of his team’s performance in the first half. “They came out and they hit us in the mouth. They played extremely well. They threw the 1-3-1 on us. We were not expecting that and it threw us out of rhythm a little bit. Scoring three points in a half, that really shocked my basketball team. I went in at halftime and I guess they just expected me to jump on them. But I told them, ‘I want you to just sit down, just breathe and calm down. They threw everything they could possibly throw at us and they only scored 10 points.’”

A different team emerged from the locker room for the second half.

DHS outpaced the Lady Jaguars 15-7 in the third period to carry an 18-17 lead into the final stanza.

White, who was named to the all-tournament team, finished with 10 points, eight of which came in the second half.

For her part, Clayton felt like she had something to prove.

“Every game we played them, they seemed to get to me,” she said of the Lady Jaguars. “I knew tonight was an important night, so I knew to just drive in, be effective more and dish the ball off. The front man on that defense is nothing to me. I break that man on defense, we’re in there.”

Along with White and Moore, junior Courtney Hill was named to the all-tournament team. She scored eight points, all in the third quarter.

The Lady Tigers (22-7) will be back in action Monday when they play host to Beauregard High School in a sub-regional showdown. The game is slated for a 6 p.m. start.