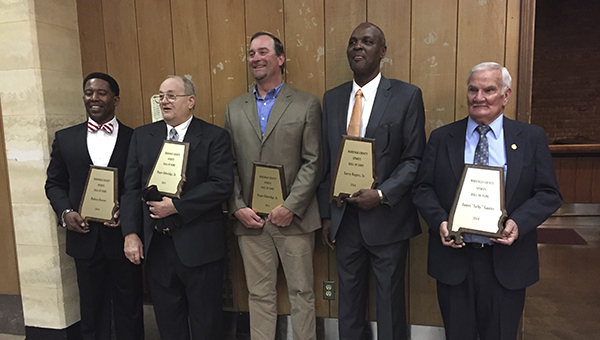 It was a night of firsts Monday night when the Marengo County Sports Hall of Fame inducted five new members.

The 2015 class included four from Linden and one from Demopolis. In addition to the Etheridge duo and Gunter, Larry Rogers and Rodney Rowser were also inducted as members.

“It took a lot of support from the community to get us to Virginia and Florida for the different tournaments,” Chad Broussard said. “My family and I moved here about a year ago, and you’ve welcomed us into the community. We’re proud to call Marengo County home. This wouldn’t have been possible without the assistant coaches. These players represented the county well throughout the summer. We may not have always been the most talented team out there, but we always had the most class.”

The MCSHOF Board of Directors also awarded their annual scholarship to Ja’Shaunda Allen of Marengo High School. Allen has a 3.5 grade point average, participates in cheerleading, track and the school’s choir. She is also a member of the National Honor Society, a member of Shiloh Missionary Baptist Church and volunteers with the Salvation Army.

Before the induction ceremony, each inductee was able to choose who they wanted to introduce them in the ceremony. Etheridge, Sr. was introduced by former teammate Larry Russell Etheridge.

“I saw his as a class A athlete,” Larry Etheridge said. “I saw him as a classmate who loved to play sports. No matter what the sport was, stuff happened when he touched the ball. He seldom missed a play in a game, and he could throw or run as a quarterback for us. The best game I ever saw him play was the second half of the 1962 Oil Bowl against 4A Vigor.”

Roger Etheridge, Sr. thanked the Hall of Fame board for inducting him, and he kept those in attendance laughing.

“Way back when I was young, I remember listening to the Demopolis Tiger football games on the radio, and they had some good teams back then, but we stopped some of that,” said the former Linden Red Devil quarterback. “I loved to play sports, and when it wasn’t in school, it was against my brother in our backyard.”

Etheridge, Sr. graduated from Linden in 1963 and was selected to the All-Black Belt Conference in three sports, All-State in three sports, was Offensive Back of the Year in 1962 and led the Red Devils to an undefeated season and the Class A State Championship.

Etheridge, Jr. was inducted by his former coach and mentor, Webb Tutt.

“Little Roger has all the qualities necessary to be inducted into this Hall of Fame,” Tutt said. “He’s a competitor, and he thrived under pressure. He was not afraid of adversity. He was a quiet leader and a gentle giant. He was the best athlete I’ve ever coached.”

Etheridge, Jr., who played professional baseball in several minor league organizations, had high praises for his coach at Marengo Academy.

“I want to thank Coach Tutt for being such a great role model for me,” he said. “This is a big honor, and I’m humbled. It’s not every day that a kid lives his dream, but I was able to see a lot of places and do a lot of things playing professional baseball that I wouldn’t have otherwise been able to do. It just wasn’t meant to be for me, but I was able to play seven or eight years of professional baseball.”

He told a story of a time he was in the Cincinnati Reds organization when Hall of Fame pitcher Ferguson Jenkins gave him some pointers on pitching.

“He told me that if I do this certain thing, I’d be in the Major Leagues the next season,” he said. “I had to take a step back, and he asked me what was wrong. I told him that’s the same thing my dad told me when he was coaching me when I was young. My father was the best coach I ever had.”

Gunter was introduced by a friend and colleague, Terry Cook.

“It’s an honor to introduce him,” Clark said. “He’s my greatest and most precious friend. He’s a monument in Tuscaloosa softball, and he’s the epitome of an umpire.”

Gunter said when he found out he was going to be inducted into the MCSHOF, he was looking at the previous inductees and saw players and coaches, but no umpires.

“I know you’ve all said it before, and tonight, you’ll finally get your chance to hang an umpire,” he said in reference to his plaque. “I’ve been around the game a long time, called a lot of big games and I’ve had some success, but I always knew the game was about the players, not the umpires. It’s about taking care of the athletes”

Larry Rogers, inducted for his skills on the basketball court, was introduced by his daughter, Helena.

Rogers said his focus and determination came from not being able to beat his brother in basketball when they were younger.

“I thought I was good until I played my brother,” he said. “That gave me the drive and determination to never give up. I played varsity as a sophomore, and not only was I the youngest on the court, but I was also the leading scorer and rebounder. This is an honor and a highlight of my life.”

After playing at George P. Austin High School in Linden, Rogers went on to play at Southeast Missouri State. After a year, he joined the Army, where he played for a year. After serving three years in the Army, he received a scholarship to play at the University of Houston. He was drafted in 1980 by the New York Knicks, but an injury ended his NBA career.

The only inductee from Demopolis, Rodney Rowser, was inducted for his skills on the track. He was introduced by Henrietta McCain Saelens, a supporter of his while he ran for Demopolis High School.

“I was there at the beginning,” Saelens said. “I’m the mother of six athletes, and my oldest loved to run. She was on the track team with Rodney. I became transportation, made sure they got fed, I got them to practice. At our first meet, Rodney’s event came up, and about halfway through, he changed gears and won. That’s a gift.”

Rowser said he started running track for Demopolis in the first year the school had a boys track team when he was in the eighth grade.

“I won more races than I lost in high school,” he said. “When I made it to Montgomery for state, I only lost my senior year, and the reason was that I got the big head. I had run the second-fastest 200-meter time in the state, and my picture was on the front sports page of the Tuscaloosa News. That hurt me.”

Rowser went on to Troy State University, where he set several records, some of which still stand.

“College was great,” he said. “I set and broke several records, and at one time, I held five records at once. But all of the records I set and broke…that’s not important to me. It was important for me to come back and give back to these kids all my knowledge about track and field.”

Rowser has served as a volunteer track coach at Demopolis High School for more than 20 years. During his time as a volunteer, he has helped secure a state championship relay team, coached three individual state champions, and in the summer of 2014, coached a group of students that qualified for the U.S. Track and Field Championship.