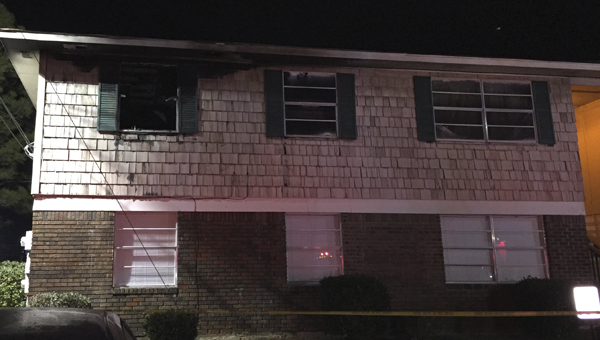 “There were two young males asleep in the first bedroom, and the fire started in the second bedroom,” Tate said. “One boy got out on his own, and a guy at the filling station there, Lane Hawkins, who just graduated from high school recently, heard the screams and ran in and got the other boy out. He tried to go back for the adults, but the smoke was too thick at that point. He saved that boy’s life.”

“When his mask was knocked off, he suffered some burns to his face and some smoke inhalation,” Tate said. “He went to UAB and was released Sunday after being treated. Another firefighter was burned through his gear, and he was treated and released after the fire.”

Tate said the unpredictability of house fires makes them difficult to fight.

“We don’t have many house fires, but they are some of the highest risk things because they are so unpredictable with what is going to happen,” Tate said. “They did what they had to do. I wish the outcome would have been a little bit better for the adults in there.”

In addition to the Demopolis Fire Department, the Demopolis Police Department also responded to the call. The DPD transported Sewell to Bryan W. Whitfield Memorial Hospital because the ambulances that were close-by were tied up with medical calls.

“Along with the fire department, several of our officers went in to try to get the person out of the house too, but the fire was too intense,” Demopolis Police Chief Tommie Reese said.

Reese said he is asking everyone to keep the family in their thoughts and prayers.

The cause of the fire is still unknown. The state fire marshal was called to help with the investigation.