The Demopolis City Council approved the plan presented by Chief Tommie Reese at its regular meeting on Thursday night at Rooster Hall.

“In 2009 when I became chief, we didn’t have a location to store our vehicles as far as parking, and I went to the church and asked them to allow us to park our seized cars there for a period of a year,” Reese said. “It’s now ended up being six years. The church has not made any request of me to move those cars, but I know it’s time.” 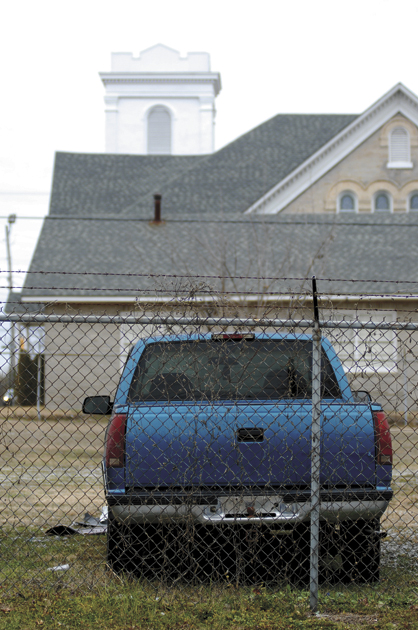 The Demopolis Police Department currently stores impounded vehicles in a lot behind First Presbyterian Church. On Thursday, the Demopolis City Council OK’d a plan by Chief Tommie Reese to construct an impound lot behind the police station.

The new lot will be capable of holding 20 cars and will be surrounded by a 60-feet by 55-feet chain link fence that will be six feet tall and have three strands of barbed wire across the top.

River City Fencing will construct the fence at a cost of $5,923.

According to Reese the project will be funded with money generated from bond filing fees, and will be done at no cost to the city.

“That money is set aside for law enforcement and court use,” Reese said.

Reese said a camera will also be placed behind the police station to help provide surveillance over the lot.

•The council authorized Mayor Mike Grayson to sign an award letter with The Frazer Lanier Company once the 2015 warrants are sold. According to finance committee member Bill Meador, the reworking of the city’s bonds could result in a savings of as much as $170,000.

•The council approved the use of the Demopolis Landing for West Alabama Mental Health’s smoke free weekend, which will be held March 20-22. According to Mentral Ledbetter, the weekend-long event is meant to promote a smoke-free, drug-free city. The event will also feature a 5K run/walk on March 21 that will follow the same course as the Jungle Bell Run.

•The council passed a resolution voicing its support for the UAB football program, which was shut down by university president Ray Watts in December.

The city council will hold its next meeting March 5 at Rooster Hall at 5:15 p.m.