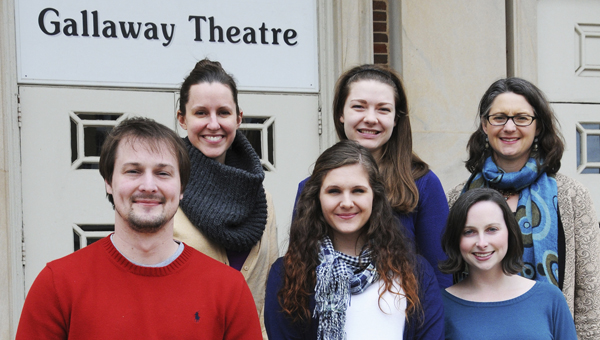 The University of Alabama Department of Theatre and Dance has announced the cast of next week’s Alabama tribute to its playwright-next-door, Tennessee Williams. Shown from left to right (top row) are Elizabeth Bernhardt, Andrea Love and Allison Hetzel; and (bottom row) Michael Witherell, Julia Martin and Sarah Jean Peters.

The University of Alabama Department of Theatre and Dance has announced the cast of next week’s Alabama tribute to its playwright-next-door, Tennessee Williams.

The two-night event begins at Gaineswood in Demopolis on Monday, March 2, at 6 p.m. and concludes at the Marian Gallaway Theatre on the University of Alabama campus Tuesday, March 3, at 7:30 p.m. Both events are free.

The actors from UA and their scenes to be performed from the plays of Williams over the two nights include Andrea Love and Elizabeth Bernhardt, who will enact excerpts from “A Lovely Sunday for Creve Coeur.” Love will also read from the role of Blanche DuBois in “A Streetcar Named Desire.” Michael Witherell will portray Mitch from “Streetcar” and Brick in “Cat on A Hot Tin Roof.” Julia Martin will perform the role of “Maggie the Cat” in “Cat on A Hot Tin Roof.”

From “The Glass Menagerie,” Sarah Jean Peters will read the role of the delicate Laura, and Allison Hetzell portrays her mother, the domineering Amanda Wingfield.

Amanda was inspired by Williams’s mother, Edwina Dakin of Columbus, Miss., who was “courted” by Gaius Whitfield of Demopolis.

Marian Gallaway, the University’s first director of theatre, was a close friend to Williams and a champion of his early career during the 1940s, the decade of his first Broadway smash with “The Glass Menagerie.” Allison Hetzell is a UA Associate Professor of Acting and Voice who will direct the actors, many of whom are engaged in the University’s Master of Fine Arts (MFA) program.

Gallaway praised the playwriting by her friend Tennessee Williams within his masterpiece “The Glass Menagerie” in her book entitled “Constructing a Play” (1950). By focusing on the moment when Laura Wingfield entertains her only “gentleman caller” in the play, Gallaway wrote that Williams masterfully selected “the one dramatic moment of an undramatic life” and “was able to epitomize the whole life” of Laura in a singular pivotal scene onstage.

The playwright’s friend, Kenneth Holditch, will talk on the University of Alabama stage Tuesday about Williams’ use of friends’ names for characters in his plays.

Gallaway’s name was frequently borrowed by the playwright. In 1978, as Williams approached the end of his life, he used her name for the lead character Dorothea Gallaway in “A Lovely Sunday for Creve Coeur.” The play debuted on Broadway shortly after Gallaway retired from UA in 1976.

Retired UA Theatre Chair Ed Williams, a friend and colleague of Gallaway, will join Holditch on stage at the Gallaway Theatre for a discussion of Gallaway’s long friendship with Williams. Their conversation will be moderated by Don Noble, the host of Alabama Public Television’s popular and longstanding literary program “Bookmark.”

At the Gaineswood event, the focus will be on “The Glass Menagerie” and the influence of Edwina Dakin on her son. Members of the local theater company, The Canebrake Players, will tell the biographies of both Edwina and her Demopolis suitor Gaius Whitfield. The performances from Williams’s plays by the University actors will be staged for both events. For additional details, call Gaineswood at (334) 289-4846.