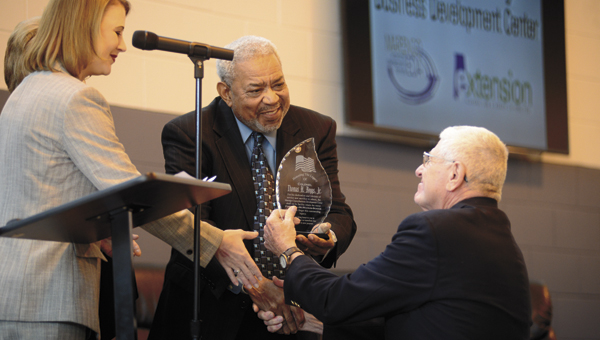 MCEDA Director Brenda Tuck and Marengo County Commissioner Freddie Armstead present retired Col. Tom Boggs with a token of their appreciation for his service in the military during Friday’s grand opening at the Marengo County Business Development Center in Linden.

When operational, the building was named Fort Hill, McManus, Boggs in honor of Lt. Col. Bracey C. Hill, Col. Edwin L. McManus and Col. Thomas H. Boggs, Jr. The entities managing the building now decided they wanted to honor those who served in the building.

“We hope to bring honor to them here by what we do,” said MCEDA Director Brenda Tuck. “I hope what we’re doing with this building can be replicated across the state.”

Each of the three men, or their families, the building is named in honor of was presented with a token of appreciation from MCEDA, the County Commission and MCCES.

“It’s quite an honor to be here, and it’s humbling to be here representing my father,” said Stephen Hill, son of Lt. Col. Bracey Hill. “I’m honored and proud to be here.”

Boggs accepted his award and said he feels it’s important to remember those who served at the armory.

“It’s important for this building to continue to be known as a fort,” he said. “We fought to keep it open as an armory, and it didn’t work out that way, but I’m proud to see the legacy carried on.”

MCCES Coordinator Kathryn Friday said when she and Tuck came up with the idea, Tuck was new in Marengo County.

“At the time that we came up with the idea, Brenda was brand new here, and we had just found out the armory was going to close,” she said. “We took the idea to the county commission, and they were on board. She had the experience of working with a small business incubator, and that’s what we’re doing here now. The county had to be the third party involved to purchase the building, and they were all for it. I give them recognition for dreaming with us.”

Commission Chairman Freddie Armstead said it takes a group effort to make something like this happen.

“It takes all of us working together to make this a success,” he said. “Brenda has done a good job with all of this, along with Kathryn and everyone else. This is the most exciting thing that’s happened in Linden in a long time.”

Jim Byard, the director of the Alabama Department of Economic and Community Affairs, said starting a center like this is common in larger cities across the state, but it’s rare in small, rural areas.

“This is a normal happening in larger communities, but not in places like Marengo County and Linden,” he said. “This means job creation, and it also means there’s space for job creation to continue happening. We’re excited to see this in the future.”

Also attending the ceremony was Ronnie Davis, the director of USDA Rural Development. He said he and his department are proud to be a part of the Marengo County Business Development Center.

“You have to have somewhere to start from, and this center provides that,” he said. “We’re proud to be able to help fund these opportunities.”

The center has several traditional office spaces available for start-up businesses, as well as warehouse space for businesses that need storage.

“If you’ve got a business you want to start, come talk to us about what we can do,” Tuck said.