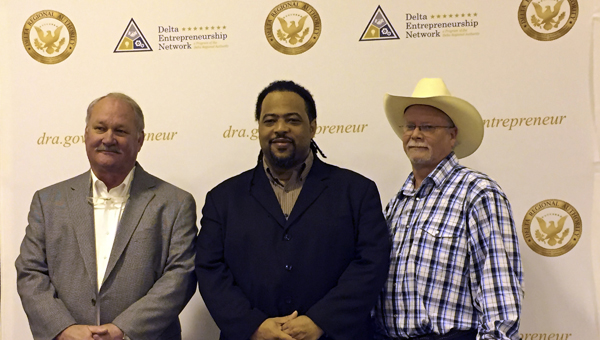 The three winners from the Delta Regional Authority’s Delta Challenge in Linden on Monday were, from left, Al Barnett with Control Flo Medical Inc. in Union Springs; Winfield Ezell, Jr., with Obsidian Creative Studios in Northport; and Jeff Howell with Howell’s Service Center in Marion Junction.

During the event, seven entrepreneurs pitched their ideas to a panel of judges for a chance to attend New Orleans Entrepreneur Week on March 25-27. The judges selected the top three pitches from Monday’s event to become Delta Entrepreneurship Network fellows.

While at NOEW, fellows will have access to programmatic seminars, workshops and mentorship from panelists and industry experts, as well as the opportunity to showcase their company to a panel of investors.

Ezell said Obsidian Creative Studios has a main purpose of creating and producing urban-influenced content targeted at today’s multi-cultural consumer. He added that his studio has already filmed and produced two movies.

“We want to involve people throughout the entire filming process, not just post-production like most of what we see today,” Ezell said. “We want to create an investment for our audience so they will want to go to the theater to see our film.”

In addition to movies, OCS also produces music and other forms of art.

Howell’s pitch to the judges pertained to a system to make backing up with small trailers easier.

The system he invented is called the E-Z Back Trailer. He said the most difficult trailers to back up are short trailers. His system keeps the trailer held in place behind the vehicle through power, making it an extension of the vehicle, rather than a free-moving entity behind the vehicle.

The tires on the trailer turn and adjust as needed while backing up. He said he has driven with his own trailer with this system at highway speeds for long distances without problems.

“If something happens and the power is cut, the worst-case scenario is that it returns to being a normal trailer,” he said.

The third entrepreneur selected by the judges, Barnett, developed a non-bladder invasive catheter.

He said he suffers from a severe strictural disease that caused him to have multiple bladder infections, hospitalization, pain and suffering. He developed the ResQ Non Bladder Invasive Catheter for himself, and said he has not had a single infection in the 15 years he’s been wearing it.

He said the target for the product is those who suffer with urinary incontinence.

“This catheter is worn internally and stops the unwanted leakage of urine,” he said. “Patients operate a simple valve to void their bladder whenever and wherever it is convenient, solving the long-standing issue in the treatment of incontinence and strictures.”

The three entrepreneurs will attend NOEW at the end of the month for a chance to find potential investors into their companies.

Brenda Tuck with the Marengo County Economic Development Authority thanks Robertson Bank for their support of the DRA’s program.