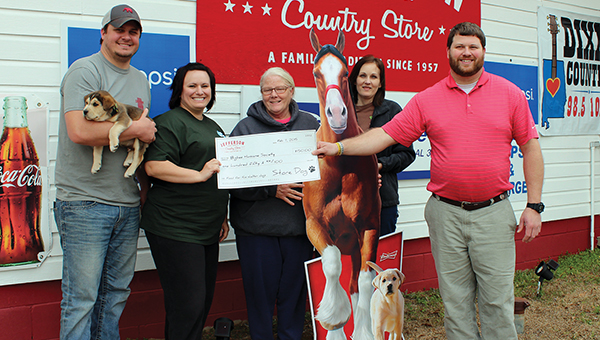 Since early 2014, T-shirts featuring Jefferson Country Store mascot Store Dog in support of Bigbee Humane Society of Demopolis have been spotted across the United States.

In February, volunteers from Bigbee picked up a nother check , this time for $150, proceeds from the most recent batch of t-shirt sales.

Store Dog is the only survivor of three dogs who came to the store shortly after it opened for business in October 2013 and has become a local legend on Facebook. The dog is cared for by the community, including neighbors who stop by on Sunday afternoons to leave food and treats for him.

Store owners Tony Luker and Betsy Compton say they have had orders for the T-shirt in several states. Visitors from Michigan, Mississippi, Tennessee, Kentucky, Washington D.C., Montana and several other locales have stopped in for shirts after following the rambling black and white patched canine on the Store’s Facebook page. They say they have received photos of others wearing the shirts from Walt Disney World to New York City, the Gulf Coast, and even Bolivia.

“We love getting messages and photos from people who have spotted Store Dog on shirts at ballgames and other trips, especially outside Marengo County or even Alabama,” said Luker.

“Our biggest goal is to help Bigbee with the work they do, and since we’re here at the store six days a week, we don’t really get a chance to go volunteer at the shelter like a lot of our friends do. We hope these shirts continue to raise awareness, and that the proceeds we get to donate help feed or vet the dogs there.”

The bashful Store Dog is well-known in the community and evidently abroad. Frequent and first-time visitors alike know him by name and look for him.

“Store Dog is pretty popular among our Facebook followers, so when someone visits for the first time, they almost always ask where Store Dog is if they don’t see him when they come in,” Compton explained. “He can be shy, and a little bit peculiar, but he usually lets down his guard a little if treats are involved. He goes to church whenever the doors open, fire department meetings, community club events, and anywhere else that people gather near the store.”

A limited quantity of Store Dog shirts is still available at the store, and additional sizes or quantities can be pre-ordered at Jefferson Country Store. For more information, email jeffersoncountrystore@gmail.com or visit the store’s page at www.facebook.com/jeffersonstore.