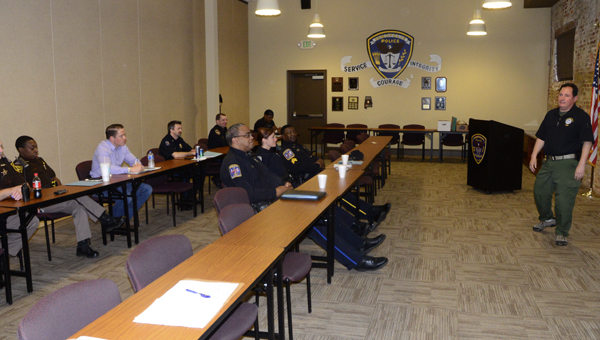 Members of the Demopolis Police Department and surrounding agencies participate in “Survival Spanish,” a class hosted by the U.S. Department of Justice and the U.S. Border Patrol.

The class, offered by the U.S. Department of Justice’s Law Enforcement Coordinating Committee and the U.S. Border Patrol, helps law enforcement alleviate the language barrier between officers and Spanish-speaking people they encounter.

“This is the second time we’ve hosted this class,” said DPD Chief Tommie Reese. “There are more Spanish-speaking people coming to our area, not only to live, but just traveling through, so it’s important for our officers to be able to communicate if necessary.”

Hector Torres and Richard Silva, Border Patrol agents out of the Mobile office, taught the class.

Silva said the class comes down to safety.

“We’re here to introduce basic skills to enable officers to communicate and do their job in a safe manner,” Silva said. “We always get feedback, whether it’s a week or a few months following the class, that the class was useful.”