A Demopolis man visiting his uncle was shot and killed Saturday night while confronting two car burglars in Selma.

On Saturday at approximately 10:15 p.m., Selma officers responded to the 500 block of Dallas Avenue in reference to a gunshot victim. When they arrived on the scene, officers found 28-year-old Jimmy Hudgens with a gunshot wound to the face. 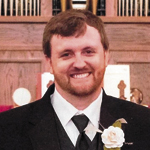 Hudgens was stabilized on the scene and transported to a Montgomery hospital, where he died early Sunday morning.

Several of Hudgens’ friends all echoed the same sentiment — that Hudgens was a loyal friend who would do anything for anybody when the time came.

“Ever since middle school, I had the privilege of calling Jimmy my best friend,” Kurt Krusmark said. “We were raised together. He was a great guy who would do anything for anybody. He had just gotten married and moved back to Demopolis and into a house. He loved his wife and his family.”

“When I think of Jimmy, the first things that come to mind are that he was loyal, smart and funny,” said Elliott Glass, another close friend. “As a friend or family member, he was one of the most loyal people I’ve ever met. He would do anything for you. With Jimmy, humor and intellect went hand-in-hand. He could give a perspective on life, or anything for that matter, that would make you laugh and make you think. He was one of a kind.”

Catherine Meador, whose son William grew up with Hudgens, said he was at her house a lot when he was growing up.

“My son grew up with him, and he was always here for birthday parties and things like that,” she said. “My husband Bill coached him in rec ball. He had a big heart and a big smile. Those are the first things that come to mind with Jimmy. He grew up with my kids in church and in sports. It’s hard to believe he won’t be here. We were so glad to have him back in the community, and he was already getting involved in things like Christmas on the River. He was back in the city he loved. It’s really unbelievable.”

Dick Hudgens told police he and his nephew went outside after hearing a loud bang and crashing noises near their home shortly after 10 p.m.

The victim confronted the first suspect, but did not see the second one, identified by District Attorney Michael Jackson as Devontae Jiles, hiding in some bushes.

Jiles fired twice, striking Jimmy Hudgens once in the face. A search of the scene found that the suspects had broken into a vehicle on the property and were trying to break into another one when confronted.

Selma’s Major Crimes Unit detectives received information that Jiles, 22, of Selma and Kendarious Brown, 21, of Selma were involved in the shooting. About the same time, detectives learned of a suspicious vehicle that was parked a block away from the crime scene.

Officers maintained visual control of the vehicle and when the two suspects approached the car, they were taken into custody.

They were taken to the Dallas County Jail and are being held without bond.

Capital murder is a capital felony. If convicted, Brown and Jiles could receive life imprisonment without the possibility of parole or the death penalty. Unlawful breaking/entering a vehicle is a Class C felony. If convicted, the penalty could be one to 10 years in prison and fines up to $15,000.