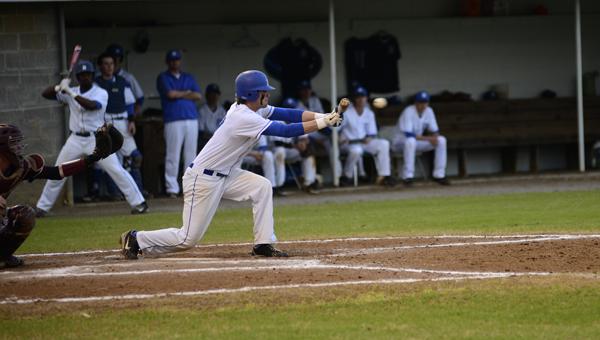 Wil Stephens lays down a bunt for Demopolis against Thomasville.

The Demopolis Tigers used a big third inning to pull away from Thomasville Tuesday night and win 7-4.

Trailing 2-1 going into the third, Jacob Rodrigues got the scoring started on a single that brought in Jamarcus Ezell. A two-RBI single by Jay Craig scored Jordan Grace and Matthew Trest, who were running for Rodrigues and RJ Cox, respectively.

Tripp Perry then singled to bring Wil Stephens and Craig across the plate, finishing off a five-run inning by Demopolis.

“I think what got it started was when we moved runners up a couple of times with bunts, had a couple of bunt hits. Guys did a good job of moving the ball, and it ended up getting hits for us. That momentum just started rolling,” Demopolis coach James Moody said of the big inning. “I saw several more swings tonight where guys tried to let the ball travel a little bit and hit the ball the other way, and we got on some fastballs. It was a much better effort altogether and the competitiveness was a lot higher than it has been being.”

Stephens also scored in the second inning on a RBI bunt single by Seth Aiken.

The final run of the game for Demopolis came in the sixth inning on a Rodrigues single that scored Ezell.

Rodrigues, Craig and Perry each finished with two RBIs, and Aiken had one. 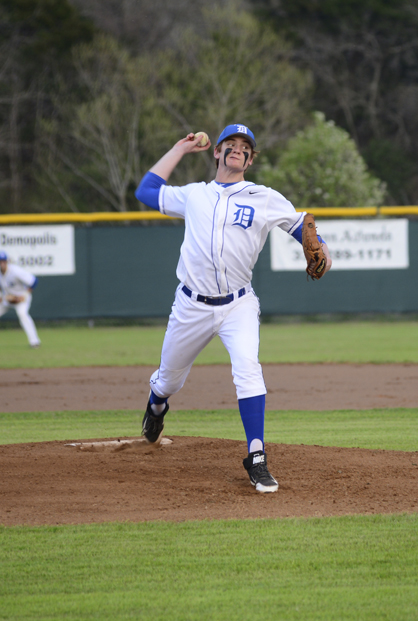 Tripp Perry started on the mound for Demopolis Tuesday. He pitched two innings for the Tigers.

Perry started the game on the mound for Demopolis and pitched two innings. He gave up two earned runs on three hits and two walks. He also struck out two batters.

Luke Yelverton relieved Perry in the third inning and pitched two innings of no-hit baseball to earn the win. He walked two batters and struck out one.

RJ Cox came in the game in the fifth inning and earned the three-inning save. He allowed two hits and walked two batters, gave up two earned runs, but struck out three to help preserve the win.

Moody credited the Demopolis fans for helping to elevate the energy level of his team.

“The crowd was really good tonight. I think it just keeps their energy level up. I really felt like our crowd played a big factor tonight,” he said.

The Tigers will be back in action Friday at home for their first area game against Dallas County.

“I certainly hope it starts something and it builds on itself. I tell them all the time we need to stay even keeled and not be up and down,” Moody said. “Maybe some guys are starting to buy in a little more to what we’re trying to do. My hope is that they keep caring about each other, keep loving each other and play with class. I thought we did that tonight.”