The Demopolis Lady Tigers finished off area play Wednesday night with a 15-0 win over Wilcox Central.

Demopolis opened the game with an eight-run first inning to take control of the game. 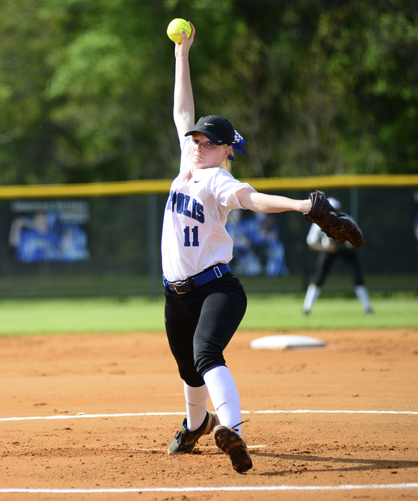 Jessica Adams singled to lead off the game, then stole second and third base on consecutive pitches and scored on a wild pitch.

Courtney Smith walked and was brought in to score on an Abbey Latham double. Latham later scored on an illegal pitch.

Natalie Tatum hit a two-RBI double to bring in Jade Montgomery and Kendall Hannah. Anna Caroline Logan singled to score Tatum, Smith doubled to bring in Logan and Adams to cap off the eight-run first inning.

Latham led off the second inning with an inside-the-park home run, which was the only run of the inning for the Lady Tigers.

Demopolis added three more runs in the third inning. Elley Brown tripled to bring in Rachel Smith and Lane Burbage. A single by Holli Gandy scored Brown to cap off the third inning, leaving Demopolis with a 12-0 lead.

The Lady Tigers ended the game in the fourth with a three-run inning. Rachel Smith singled to bring in Anna Katherine Aldridge and Alex Abrams, then Burbage doubled to bring Smith across the plate.

DHS head coach Stephen Campbell said after having five days off, he was pleased with how his team performed.

“We rebounded well after a week off,” he said. “The girls had to adjust to some slower pitching from what they saw in Gulf Shores last week. They did a good job putting the ball in play. They came out here and took care of business.”

“I wanted to get both of them some work tonight,” Campbell said. “I’m pleased with their accuracy and control. I wanted to make sure they got some work in before facing a good Hale County team Thursday.”

The Lady Tigers will be back in action at home Thursday night at 5 p.m.