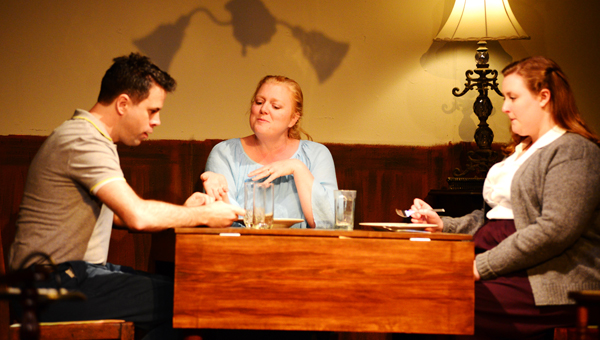 Kirk Brooker, Karen Hill Dean and Katherine Oakes rehearse an early dinner scene from Tennessee Williams’ “The Glass Menagerie.” The play will be performed Friday through Monday at the Old School on Main.

A literary classic, Tennessee Williams’ “The Glass Menagerie,” is coming to The Canebrake Players’ stage this week.

The play will be performed Friday, April 24 through Monday, April 27 at the Old School on Main.

The play is being directed by Susanna Naisbett, who says she’s learned much about Williams and the play in the past few weeks.

“Every night at rehearsal, I pick up some symbolism that I didn’t get before,” Naisbett said. “It’s fascinating.”

“The Glass Menagerie” is a four-character play with strong autobiographical characters based on Williams himself, his mother and his mentally-fragile sister. The play shot Williams from relative obscurity to one of the country’s most famous playwrights.

“I’m excited to work with such talented people, cast and crew,” Naisbett said.

The play will be performed at 7 p.m. on Friday, Saturday and Monday and 2 p.m. on Sunday. Tickets are $10 for adults and $7 for students.

“The Glass Menagerie” is being performed as a tribute to Walter Brown McCord, an early Canebrake director, and in conjunction with “The Way We Worked” Smithsonian exhibit and the Southern Literary Trial.